The embattled Indian businessman, Ashok Kumar Sivaram, who was recently repatriated wants to return to the country.

This has prompted his lawyers in Ghana to petition the Interior Minister over the deportation.

[contextly_sidebar id=”Wf6fQB9YvziJDmFaNU4Xx9gYkpe1z5rm”]According to his lawyers, Sivaram should be allowed back into the country because he was not served a deportation letter as expected before the Ghana Immigration Service carried out the exercise.

The Businessman was deported earlier this month for failing to renew his work and residence permits.

The recent repatriation is the second time the Immigration Service carried out the exercise against him.

According to the Justices of the Supreme Court, the High Court judge erred in granting the order that compelled the Immigration Service to provide the permit.

They also indicated that the judge exceeded her jurisdiction.

Some employees of Jai Mai Communications Limited, the company owned by the deported Indian Businessman, Ashok Sivram, have threatened to embark on a demonstration against what they consider an unfair treatment of their boss.

They say a man who has lived in the country for nearly two decades, doesn’t deserve to be treated in such a manner.

Read his full petition below: 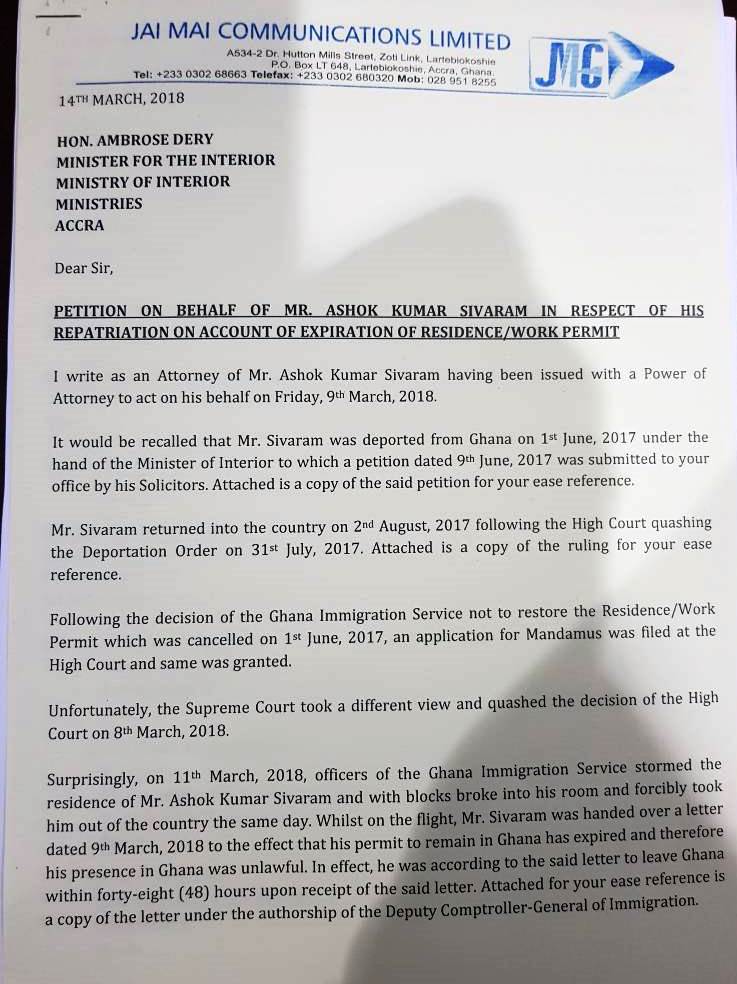 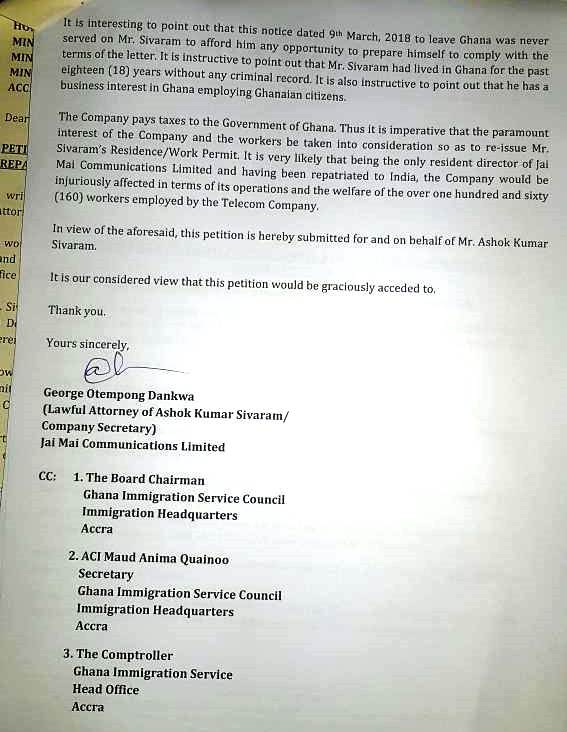 The GIS, following an order by the Interior Ministry in June 2017, deported Mr. Sivaram on the premise that he had forged his marriage certificate in an application for citizenship, which led his lawyer to contest his deportation by seeking judicial review.

The High Court, which first heard the case, upheld the businessman’s application and quashed his deportation order on July 31 on the grounds that the Interior Minister exceeded his jurisdiction.

The High Court once again ordered the GIS to restore the Residence and Work Permit of Mr. Sivaram within seven days, and also ordered the GIS’s assigns, agents and servants to desist from harassing him until his application before the Service was duly processed.

The GIS, represented by the Attorney General’s office, after the second case, filed a stay of proceedings at the High Court which was subsequently dismissed.

They went ahead to appeal the ruling in the Court of Appeal which was also dismissed leading them to the Supreme Court.