The Ministry for Transport has slammed the Mahama government for what it calls the previous administration’s shoddy implementation of the Bus Rapid Transit system in Accra.

According to the Minister for Transport, Kwaku Ofori Asiamah, about $100 million was secured as a loan from the World Bank for the BRT project,  but was not put to good use by the previous administration.

[contextly_sidebar id=”AYEm0FLOQnXJssjVgDzhZsrLaTEGF3Fp”]Speaking to Citi News after the President’s State of the Nation address, Mr. Asiamah said more Aayalolo buses will soon be deployed after the construction of a terminal at the PWD yard in the central business district of Accra.

President Nana Akufo-Addo, in his address, bemoaned the daily traffic jams and congestion in various parts of the capital, which he said was making Accra unattractive.

Mr. Ofori Asiamah also described the situation as unpardonable, and said his Ministry was working to correct the situation.

“The congestion in our city is something unacceptable which we need to work on. The World Bank gave us a loan of about $100 million for the Aayalolo buses and their attendant infrastructure. The infrastructure that they were supposed to put in place, they didn’t do it,” the Minister remarked.

He recalled that the current government had to go to “London to see HSBC, renew the loan and start the construction of the bus terminal at PWD… we cannot operate Aayalolo buses when they come to the city without having a bus terminal.”

“The dedicated bus lane that they were supposed to build from Adenta to the Central City, they have not been able to build it. Ask them where is the money,” Mr. Ofori Asiamah lamented.

The Quality Bus system (QBS), which is making use of the Aayalolo buses, was initially envisioned as part of a Bus Rapid Transport system, but the absence or lack of dedicated lanes meant it did not match up to that standard. 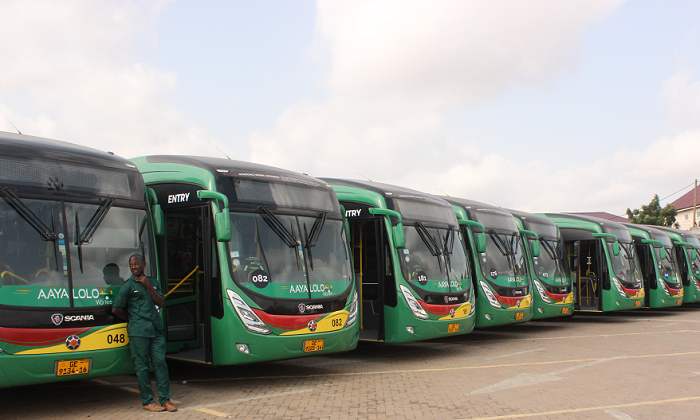 Most major roads to Accra have gained notoriety for having the city’s worst traffic jams.

Some of these roads include the Madina to 37 road, Circle to Achimota road, Ofankor to Pokuase road, and the Tema motorway – Tetteh Quarshie roundabout.

Efforts by previous governments to address the problem seem not to have yielded results as the traffic situation has not improved.

Some analysts have suggested a total review of the country’s transportation system with a shift from the construction of new roads to the implementation of policies that will encourage boarding of commercial buses and an efficient railway system.