The nomination of Martin Amidu to head the Office of the Special Prosecutor has been well received by Ghanaians on social media.

Known as the Citizen Vigilante, Mr. Amidu’s integrity and credibility was the subject of little debate as many hailed his nomination as a masterstroke from the Akufo-Addo administration. 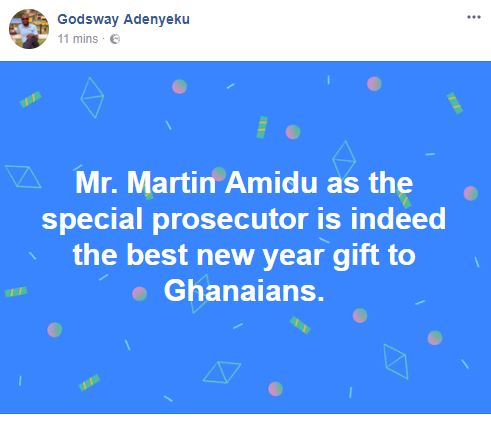 Mr. Amidu earned the nickname Citizen Vigilante because of his uncompromising anti-corruption stance, and many expressed hope he will live up to the hype ahead of what has been described as his biggest test.

Martin Amidu is a no-nonsense man. I hope will do what he is supposed to. Catch them all!

Martin Amidu is nominated as Ghana’s special prosecutor. Ghana’s own Thuli Madonsela. Let’s hope he rises up to this important task!

Served in both governments of NPP & NDC, I feel the yet to be approved special prosecutor Mr Martin Amidu is a citizen & not a spectator. I think we need people of such to promote national development irrespective of political colour.#citicbs

one of the sweetest things i’ve heard since the NPP came to power. Martin Amidu AKWAAABA

However, there was some scepticism afloat, with some questioning if Mr. Amidu may exhibit some bias against former appointees of the National Democratic Congress government given the already existing rift between the two.

Martin Amidu appointed SP. His office’s independence has been compromised already. He owes allegiance to those who recommended him. That is what is happening in Ghana