As part of planned activities to strengthen the ties between British and Ghanaian businesses, a delegation of government officials through the UK-Ghana Chamber of Commerce (UKGCC) called on the CEO of the London Stock Exchange (LSE) to deliberate on business issues that seek to benefit Ghana and its citizens.

Led by the Senior Minister, Yaw Osafo-Marfo, the delegation included the CEO of GIPC, Yofi Grant the Minister for Railways Development, Joe Ghartey, and the Deputy Minister for Energy, Joseph Cudjoe.

The visit was made possible to enable the delegation familiarize themselves with the operations and activities of the LSE.

Speaking to the LSE team, the Senior Minister, Yaw Asafo-Marfo indicated that Ghana was on a new path to development with a focus on the private sector.

According to him, approach to the new development path would involve mainly the private sector and with less concentration on the public sector. 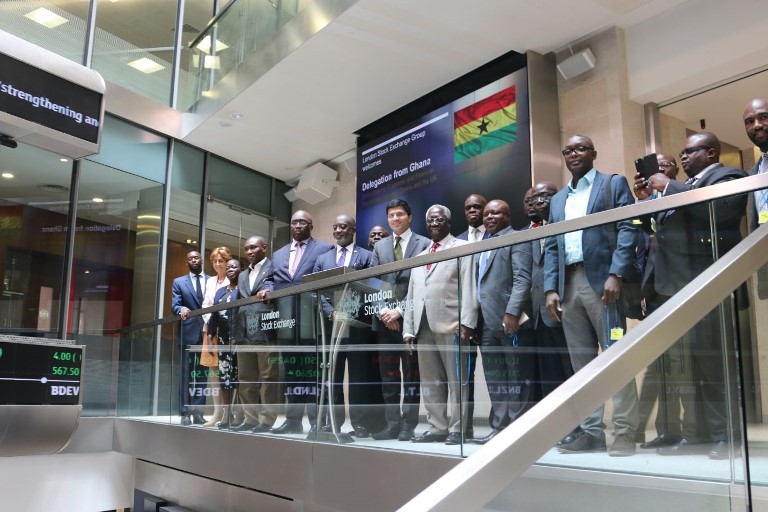 Mr. Marfo also mentioned that the Chinese government has agreed to support development in Ghana adding that “China has agreed to lend Ghana over 10-15 billion dollars to help exploit her bauxite mineral holdings and other projects”.

He further encouraged the LSE to engage with the Government of Ghana to come up with innovative ways that would help her raise funds for ongoing and future projects.

The CEO of LSE, Nikhil Rathi, welcomed the delegation and stated that the diaspora consisted a number of Ghanaians working at the LSE.

“Indeed, the Commercial Director Kofi Abban-Sackey, a Ghanaian who has risen to a senior role within the LSE, is present in this meeting”, he said.

Mr. Rathi reiterated the LSE was ready to support Ghana in accessing the deep pool of liquidity and capital that it provided, and encouraged the government to do more by engaging the LSE in raising funds and bonds to support Ghana’s development.

Commenting on the visit, Mr. Abban-Sackey expressed that, “The one thing that separates wealthy nations in the West and most impoverished countries is the access to capital.  Given Ghana’s potential and abundance in natural resources and her relationship with the London Stock Exchange, presents Ghana with significant opportunities to raise capital globally”.

He urged the Government of Ghana to fully utilize the LSE’s unique range of capital raising platforms and solutions. He also said Ghana could seize the opportunity to build the requisite skills, expertise, and infrastructure to develop her capital markets as well as secure the country’s economic future.

20 MMDAs to pilot justice for family and children policies

Be patient with gov’t – Freddy Blay to NPP members