Dismay as Trump signals exit from accord

There has been widespread international condemnation of President Trump’s announcement that the US is withdrawing from the 2015 Paris climate agreement.

UN chief Antonio Guterres’s spokesman called it “a major disappointment” while the European Union said it was “a sad day for the world”.

However, senior Republicans and the US coal industry-backed the move.

Mr Trump said the accord “punished” the US and would cost millions of American jobs.

In an address at the White House, he said he was prepared to negotiate a new agreement or re-enter the accord on improved terms.

“I was elected to represent the citizens of Pittsburgh, not Paris,” he said.

The Paris agreement commits the US and 187 other countries to keeping rising global temperatures “well below” 2C above pre-industrial levels and “endeavour to limit” them even more, to 1.5C.

Only Syria and Nicaragua did not sign up to the deal.

Mr Trump characterised the Paris agreement as a deal that aimed to hobble, disadvantage and impoverish the US.

He claimed the agreement would cost the US $3tn (£2.3tn) in lost GDP and 6.5 million jobs – while rival economies like China and India were treated more favourably.

Mr Trump said he was fulfilling his “solemn duty to protect America and its citizens”.

He added: “We don’t want other leaders and other countries laughing at us anymore – and they won’t be.”

Mr Trump did not give a timescale. However, under the agreement, a nation seeking to leave the pact can only give notice three years after the date it entered into force – 16 November 2016.

The process of leaving then takes another year, meaning it would not be complete until just weeks after the US presidential election in 2020.

US payments to the UN Green Climate Fund, which helps developing countries cope with the effects of climate change, will stop.

What has the reaction been?

Former US President Barack Obama, who agreed to the Paris deal, immediately criticised the move, accusing the Trump administration of “rejecting the future”.

“Climate change is real. Leaving Paris is not good for America or the world,” said Mr Musk, the head of tech giant Tesla.

However, Republican congressional leaders and the US coal industry backed the move, with Senate Majority Leader Mitch McConnell supporting Mr Trump “for dealing yet another significant blow to the Obama administration’s assault on domestic energy production and jobs”.

Senate Democratic leader Chuck Schumer called the decision “one of the worst policy moves made in the 21st Century because of the huge damage to our economy, our environment and our geopolitical standing”. 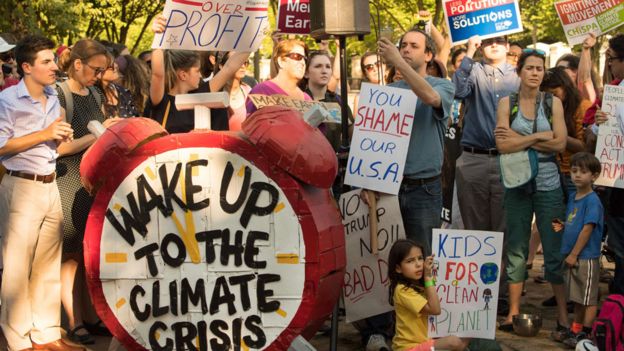 This was echoed by UK Prime Minister Theresa May, who expressed her disappointment and told Mr Trump in a phone call that the deal protects the “prosperity and security of future generations”.

France’s President Emmanuel Macron said he respected Mr Trump’s decision but believed it was a “mistake both for the US and for our planet”.

A United Nations spokeswoman said it was a “major disappointment for global efforts to reduce greenhouse gas emissions and promote global security”.

Small island nations whose existence is threatened by rising sea levels were critical of the move. The President of the Marshall Islands, Hilda Heine, said it was “highly concerning for those of us that live on the frontline of climate change”.

Snapchat Spectacles, which take photos and video, launched in UK and Europe