About 544 excavators have been moved out of their hideouts at separate illegal mining sites, following the expiration of an ultimatum given illegal miners by the Ministry of Lands and Natural Resources.

According to the Minerals Commission, the excavators have been packed in the homes of their owners, and on the streets in some areas of the country including Dunkwa and Obuasi.

The Minister of Lands and Natural Resources, Peter Amewu, gave the illegal miners a 3-week ultimatum to stop the illegality or face the full rigours of the law.

So far, some Chinese nationals and Ghanaians have been arrested for engaging in the activity since the war against galamsey intensified in March 2017. 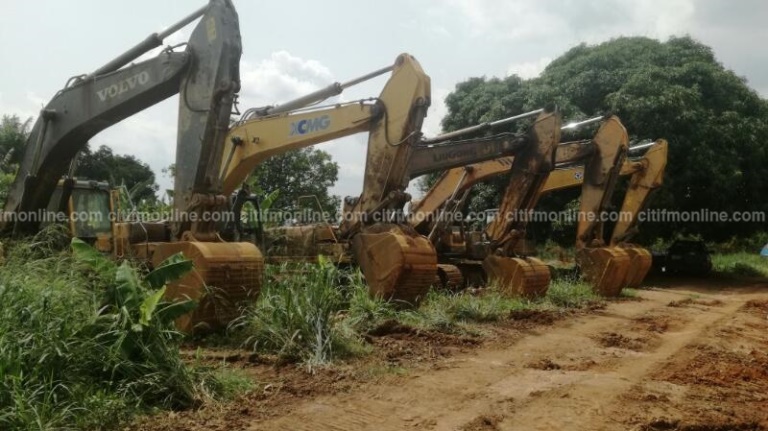 [contextly_sidebar id=”dGBzRjUCU4lP2KjNqdnYc868IZJB78QH”]As the ultimatum ends today, Wednesday, April 19, 2017, the Chief Executive Officer of the Minerals Commission, Dr. Tony Aubynn, explained to Citi News that, the recalcitrant illegal minerals who ignore the directive will have themselves to blame.

“From our checks, 544 excavators have moved voluntarily away from wherever they were, and we think that they were being used for illegal mining. That is our suspicion. But now, they have moved from wherever nook and cranny they were onto the road side, some have packed them in their homes. So it is not for us to arrest them for now, because the machines have been brought from the operations, they are not doing anything.  If they will be packed there and not do illegal mining, nobody will do anything to them. If you go to Obuasi, Dunkwa, you will see a lot of them packed by the streets. So it’s about all of a sudden moving from hideouts to places where they are not doing anything.”

When asked on how they arrived at the figure, Dr. Aubynn said they deployed their district officers to be on the lookout for such equipment.

“So we asked them to go out there and observe what has been happening there in the last one week, and then physically count them. So they gave us the information. We have actually assigned some of them to actually go on the water bodies to see the number of machines that have moved from the place and those that are there. We need to observe these things to help the minister in his next line of action.”

He said they are expecting more of such earth-moving machines in the coming weeks.

“We are expecting more machines, but we also believe that there will be recalcitrant ones who will say that come what may, we will not remove our machines. They will be the ones who will be affected by wrath of the security forces,” he added.

In a related development, a ministerial task-force is currently in the Eastern Region, touring some illegal mining sites.

The task-force, led by the Minister, John Peter Amewu, also includes officials from the Minerals Commission, security officers and other stakeholders. They have visited about six mining sites so far.

Speaking to Citi News, the Deputy Lands Minister, Benito Owusu Bio, said majority of illegal miners have heeded to the call to stop their illegal activities before Government’s next line of action.

Media campaigns, led by Citi FM with the support of civil society, have intensified since March, forcing government to end the menace, which is destroying the country’s water bodies and farmlands.