Producer Price Inflation shoots up to 11.9 %

[contextly_sidebar id=”O1AQIRwms00ZohoXc9wDU6mHqUlYDvAY”]This represents a 1.2 percent increase in the PPI figures recorded between the one month period.

According to the Ghana Statistical Service, the utility subsector recorded the highest year on year inflation of 38.3 percent.

It was followed by mining and quarrying subsector’s 19.4 percent.

Meanwhile the manufacturing sector recorded the lowest PPI; 4.9 percent, in November this year.

Acting Government Statistician, Baah Wadieh who announced the figures further stated that ten out of the sixteen major food groups in the manufacturing sub-sector recorded inflation rates higher than the sector average of 4.9 percent. 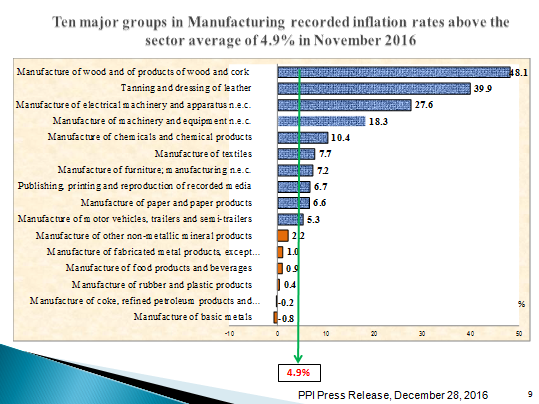 The Producer Price Index measures the average change over time in the prices received by domestic producers for the production of their goods and services.