The Ghana Integrity Initiative (GII), has accused President John Mahama of abusing incumbency and indulging in electoral corruption, for distributing outboard motors to Fisher folks during his campaign tour of the Western Region in August.

According to GII, this abuse of incumbency became apparent when the Spokesperson of the National Democratic Congress’ (NDC) campaign, Joyce Bawa Bogtari, revealed to the media that the distribution of the outboard motors and other items formed part of the state’s interventions. 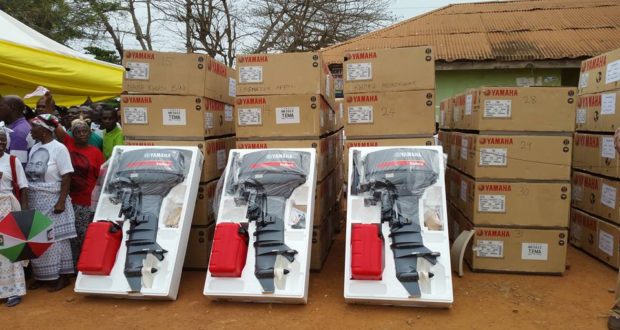 Speaking to Citi News’ Sixtus Dong Ullo on the sidelines of a presentation, the spokesperson for the GII’s Coalition Against Corruption, Edem Senanu, indicated that, there was nothing wrong with distributing the motors but “the problem arose as soon as a spokesperson came and said this is part of our national state interventions.”

“Immediately that statement was made, it suggested that public resources were utilized for the purpose of purchasing outboard motors, pans etc to give to political party members, during the campaign; and that is where the abuse of incumbency comes in.”

“Once a public officer is elected or appointed, they are not to use the resources of state either for their own personal benefit or the benefit of association or groups to which they belong.”

The distribution of the outboard motors occurred at separate durbars with the fishermen in Axim and Sekondi, and whiles suggestions have been made that President Mahama couldn’t control NDC supporters at the scene, Mr. Senanu insisted that the President was clearly on party business.

“He said he was going on a campaign tour which meant he was taking time off his official duty to do a political party activity.”

The group has already publicly chided President Mahama for the distribution describing it as worse than vote buying. The Executive Director of GII, Linda Ofori Kwafo, said it was “akin to abuse of office.”

Pro-opposition group, ‘The Truth Forum’, also cautioned President John Mahama to desist from what it called the distribution of freebies to buy votes ahead of the December 7 elections.

According to one of the leaders of the group, Yaw Buaben Asamoah, President Mahama’s gift giving on the campaign trail in the name of public policy initiatives is not only a waste of the country’s resources but demeaning to the country’s democracy.