Guinea has sent a team to find missing health officials who were attacked two days ago while visiting a village to raise awareness about Ebola.

Unconfirmed reports suggest they may have been kidnapped or even killed.

The officials had fled Wamey village in Nzerekore region after their group was pelted with stones.

The Ebola outbreak has now killed at least 2,622 people in Guinea, as well as Liberia and Sierra Leone, the World Health Organization says.

It is the world’s worst outbreak of the deadly disease, with officials warning that more than 20,000 people could ultimately be infected.

[contextly_sidebar id=”ArjNjTh9NiYC8YVjKYR78Dd54o1DDL1X”]A three-day lockdown is starting in Sierra Leone at 00.00 GMT on Friday in a bid to stop the disease spreading.

Last month, riots erupted in the area of Guinea where the health workers went missing – near where the outbreak was first recorded – following rumours that medics were contaminating people when they started spraying a market to disinfect it.

The missing people are thought to include journalists as well as local officials. 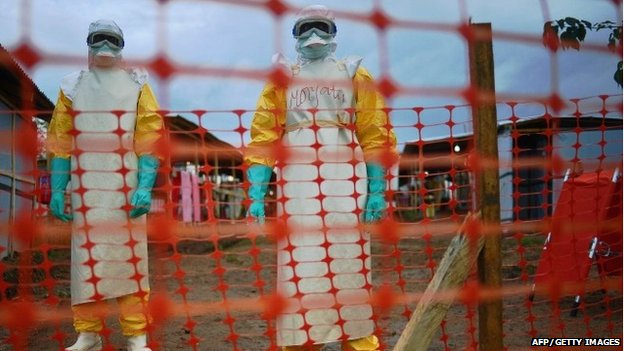 One journalist who escaped during the attack in the village said her colleagues may have been kidnapped because, while she was hiding, she heard the villagers looking for them. This has not been independently confirmed.

The BBC’s Makeme Bamba, in the Guinean capital Conakry, says that at the moment, the government delegation, which is led by the health minister, cannot reach the village by road because the main bridge leading to it has been destroyed.

The team is negotiating with local elders to try to gain access, she says.

There have been many reports of people in the region saying they do not believe Ebola exists, or refusing to cooperate with health authorities, fearing that a diagnosis means certain death.

The woman is being repatriated to Paris under maximum security.

Cumulative deaths – up to 13 September 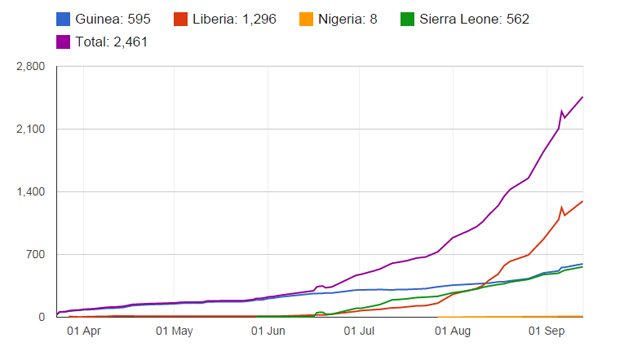