Torture has become such an integral part of policing in Nigeria that many stations have an informal torture officer, Amnesty International says.

Both the military and police use a wide range of torture methods including beatings, nail and teeth extractions and other sexual violence, it says.

One woman accused of theft in Lagos said she was sexually assaulted, and had tear gas sprayed into her vagina.

The Nigerian government has not yet responded to the rights group’s report. 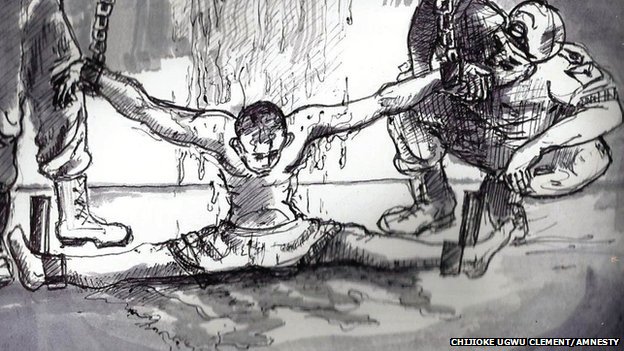 People told Amnesty about a form of water torture in which hot and cold water is poured on naked bodies
Entitled Welcome to Hell Fire, it says people are often detained in large dragnet operations and tortured as punishment, to extort money or to extract “confessions” as a way to solve cases.

The use of torture is particularly extreme in the north-east in the war against Boko Haram Islamist militants, Amnesty says.

The UK-based rights group says between 5,000 and 10,000 people have been arrested there since 2009, and executions in overcrowded detention facilities are common.

A teenage boy, pictured at the top, was among 50 people arrested by the army in Pokiskum in Yobe state last year on suspicion being a member of the Boko Haram.

At the time he was 15 years old and spent three weeks in custody in Damaturu and said he was beaten continuously with gun butts, batons and machetes. 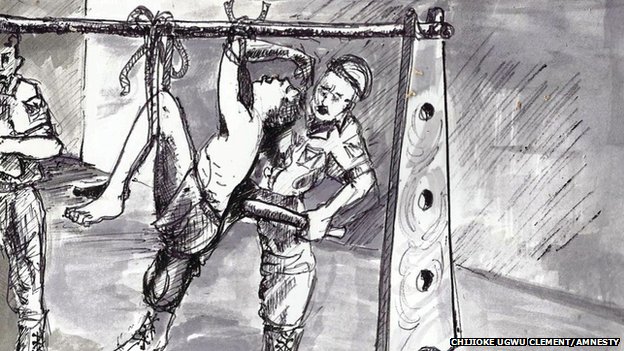 Arrested in 2013 along with other hotel staff after two guns and a human skull were found. They were beaten, detained in a van for hours and then taken to an anti-robbery squad centre in Awkuzu.

“I was thrown inside a cell. I noticed a written sign on the wall ‘Welcome to hell fire’… I was taken to the interrogation room.

“There was a police officer at one end with two suspects who were chained together.

“I saw ropes streaming down from the ceiling tops, bags of sand elevated on the perimeter wall fence of the hall and all types of rod and metal in different shapes and sizes.

“I heard shouts and screams from torture victims… I saw buckets of water on standby in case anybody faints or opts to die before appending [their] signature to already written statements.”

The officer questioned him, tied his hands and legs, passed a rod between them and elevated him from a perimeter wall. They poured water on him whenever he passed out. He was charged with murder, has since been freed on bail and is awaiting trial.

The boy told Amnesty that melted plastic was poured on his back and he was asked to walk and roll over broken bottles in a hole, and cold water was poured on him and others.

A former soldier who served at Damaturu confirmed that torture was routinely used at the camp.

“An electrified baton is used on a person to make them talk,” he told Amnesty.

Amnesty says the report was compiled using 500 interviews during 20 separate visits to Nigeria since 2007.

“Across the country, the scope and severity of torture inflicted on Nigeria’s women, men and children by the authorities supposed to protect them is shocking to even the most hardened human rights observer,” Amnesty’s Netsanet Belay said in a statement.

The 24-year-old woman sexually assaulted with tear gas says the abuse has left her with a permanent injury.

“A policewoman took me to a small room, told me to remove everything I was wearing. She spread my legs wide and fired tear gas into my vagina… I was asked to confess that I was an armed robber… I was bleeding… up till now I still feel pain in my womb,” she said. 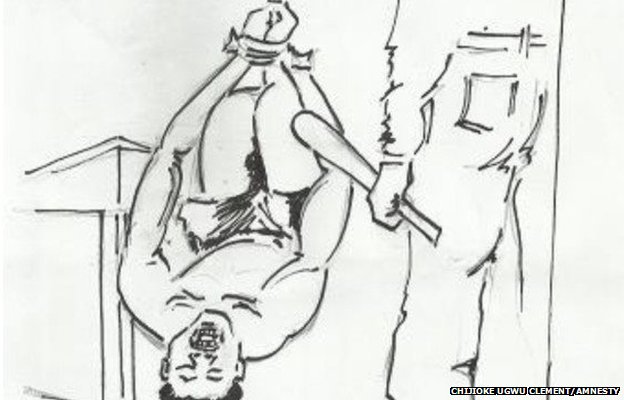 She has been charged with theft and remains in custody awaiting trial 10 months after her arrest.

Even though torture is prohibited under the constitution, Amnesty notes that Nigeria’s politicians have yet to pass a bill to criminalise it.

It says security forces enjoy a climate of impunity and the criminal justice system is riddled with corruption.