‘Something huge is coming’ – Wutah

Ghanaian highlife duo, Wutah, has dispelled rumours that the group is on the verge of collapse again, just about a year of its reunion.

In a Facebook post that has a picture of the duo, actor Kobi Rana and a Vodafone logo, Wutah Afriyie, one half of the group hinted that they are preparing to come out with a big project.

“Let them beef. After all, we are vegetarians. Something huge is coming!” he posted. 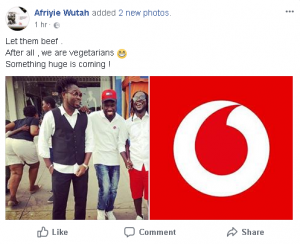 This comes few weeks after it had been speculated in the media circles that all was not well with the group and that a break up was imminent.

The speculations were mainly premised on Wutah Kobby sharing his solo songs on social media.

But responding to the issue, Kobby said those were songs he had done before their reunion and found nothing wrong sharing them.

He assured that the group was intact and ready to make greater strides.

Wutah came into the limelight in 2004 when it contested for the Nescafe Africa Revelation music competition in Accra and came second to Praye. The name Wutah is a Hausa word which means fire.

Their debut album, ‘Anamontuo’ which has songs like ‘Adonko’, ‘Goosie Gander’ and ‘Big Dreams’ earned them eleven nominations including The Most Popular Song of the Year, Album Of the Year and Artiste of the Year in the Vodafone Ghana Music Awards.

In 2009, they separated and started recording their solo projects. Afriyie has released song like ‘I Do,’ ‘Love of My Life,’ ‘Tontonti,’ ‘Everlasting Love’ and ‘Here to Stay.’ Kobby also has songs like ‘Chiochio,’ ‘Pii Por Pii,’ ‘Warning,’ and ‘Father for All.’

They came back in 2017 and have since registered a huge presence in the music industry with ‘Bronya.’But Before ‘Bronya,’ they had released ‘AK47.’