uniBank to challenge takeover by BoG

Dr. Dominic Ayine is a legal advisor to uniBank

Management of insolvent indigenous Ghanaian bank, uniBank, has indicated that it will work to reverse the takeover of the bank by the Bank of Ghana (BoG).

According to the Reuters News Agency, management of uniBank is of the view that the BoG did not meet the requirement to notify them before announcing the takeover.

[contextly_sidebar id=”OguAHlKcUd8BMyxDQZdzqEgJKVkUd8Ir”]A legal adviser to uniBank, Dominic Ayine, made known this intent saying “We intend to go for arbitration.”

It is as yet unclear where the bank will pursue this arbitration.

Dr. Ayine has confirmed this decision to Citi News off record, but has refused to give further details.

The Bank of Ghana announced that it had appointed private audit firm KPMG Ghana, as the administrator when it announced it had taken over the management of uniBank.

According to the central bank, it took the decision to save uniBank from collapse.

The BoG in a statement said, KPMG, as the official administrator, will play the key role of assuming control of the bank and all its branches and “carry out the responsibilities of the shareholders, directors, and key management personnel of uniBank.”

It stated that during the period of official administration of uniBank, “the bank will remain open for business under the management and control of KPMG overseen by the Bank of Ghana, and is not being closed and liquidated.”

uniBank was found to have persistently maintained a negative capital adequacy ratio below zero making it technically insolvent. 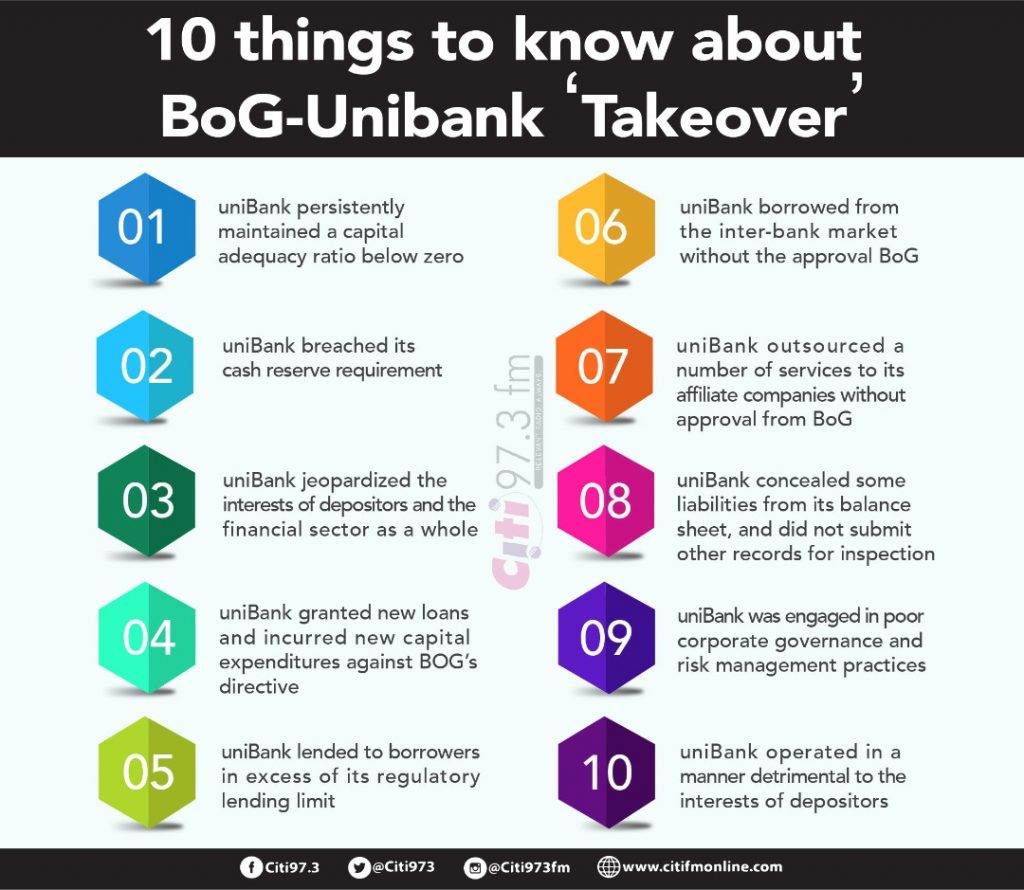 As a result, uniBank relied extensively on liquidity support of over GHS 2.2 billion from the Bank of Ghana over the past two years to meet its recurring liabilities.

The BoG revealed that uniBank had failed to comply with a directive from the BoG to stop granting new loans whilst also and deliberately concealing some liabilities from its balance sheet.

uniBank also failed to comply with several other regulatory requirements, including lending to a number of borrowers in excess of its regulatory lending limit.

Before all this, uniBank was one of nine banks identified after the asset quality review exercise undertaken in 2016, to be significantly under-capitalized with a capital asset ratio of 4.75%.