Police in the Ashanti Region have shot and killed a suspected armed robber who jumped bail in a narcotics case pending at the Nkawie Circuit Court in the Atwima Nwabiagya District.

Issah Wedam, whose age was not given by the police, was suspected to be part of a gang involved in recent robberies on the Esaase-Bokankye stretch on the main Kumasi-Sunyani road.

According to Police, the gang on Friday, 23rd February 2018, blocked the Esaase-Bokankye stretch amidst shooting leading to the death of one Kwabena Ofusuhene, a pillion rider.

The suspects admitted to the crime and mentioned Egollah, Azumah, Mmoyah, Appolar and Kwaku who are all at large as their accomplices.

The now-deceased suspect later led the police to a room at Atwima-Owabi where two (2) locally manufactured guns, a cutlass, assorted mobile phones and a leather ammunition belt with four cartridges were retrieved. 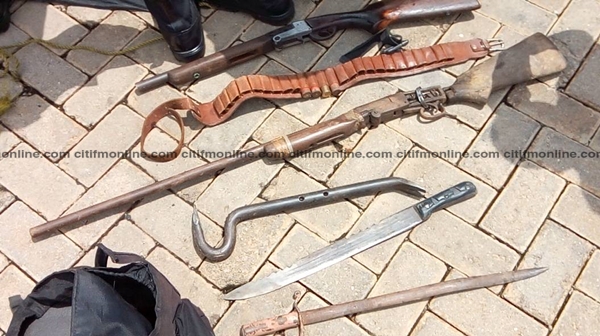 Other items retrieved included; a sword, a pinch bar, a black pack containing assorted ID cards and documents from some financial institutions as well as large quantities of assorted provisions suspected to have been robbed from their victims.

Ashanti Regional Police Commander, COP Ken Yeboah, addressing journalists in Kumasi said whilst police were escorting Issah Wedam to a waiting vehicle, the suspect took to his heels through a bamboo farm towards the banks of the Owabi River to enable him to escape lawful custody.

The police chased after the suspect and fired at him wounding him.

“The suspect was re-arrested and rushed to the Abuakwa Health Center for treatment, but was pronounced dead on arrival”, he added.

He indicated that the command will prosecute suspect Eric Vivor.

The body has since been deposited at the Komfo Anokye Teaching Hospital (KATH) morgue for preservation and autopsy.

This incident comes at a time when similar robberies have occurred in other parts of the country, raising concerns about general insecurity.

The police administration has stepped up efforts to reduce the robberies by arresting perpetrators and making sure they face the full rigours of the law.

A 43-year old security guard was recently killed by suspected armed robbers who invaded a Goil Fuel Station at Maaban near Adankwame in the Atwima Nwabiagya District of the Ashanti Region.

Kwaku Abora was found dead on a mat on top of the first floor of the Fuel Station building under construction, after the robbery incident on Saturday, 10th March 2018.