When Kenya’s self-appointed president, Raila Odinga vowed to protect the interest of Kenyans and clamp down against persons who challenge his government, that appears to include those who express a different political opinion from his on social media.

[contextly_sidebar id=”8zR08lYGl1IZ4qI1XDXEgGjoD7l5c1SL”]Odinga did not take kindly to the words of a Ghanaian researcher who strongly condemned him for swearing himself in as president of the East African country.

Abeku Adams’ scathing comment under Raila Odinga’s post and self-declaration as president, did not only earn him more than 1,000 reactions, most of which were in support of his position but also resulted in him being blocked by Odinga on Facebook.

The 34-year-old commented, “Congratulations H.E Raila “Buffoon” Odinga,’president’ of ‘little Kenya’, the man who boycotted an election and won without contesting. Such a glamour of ‘idiotism’. Africa is such a mess!!… It’s the ignorance of the mad of his madness that makes madness a mysterious illness” 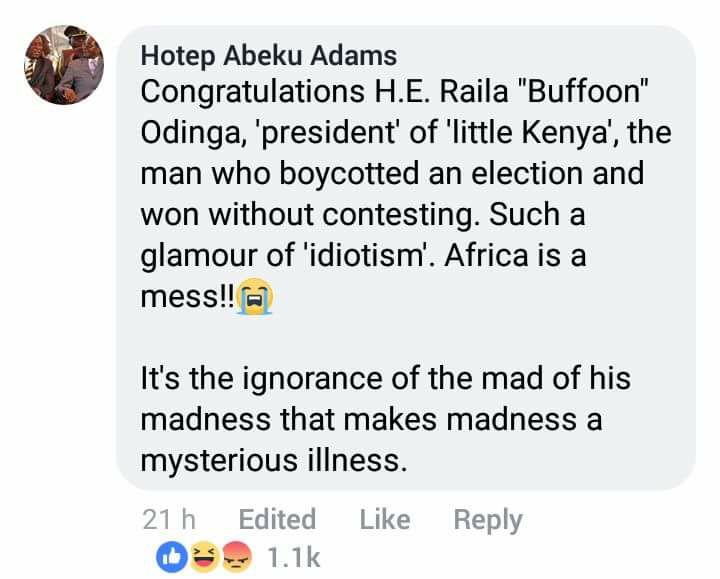 But several hours later, Abeku’s online connection with Odinga was cut off as the self-proclaimed ‘people’s President’ blocked him from seeing and commenting on his subsequent posts. 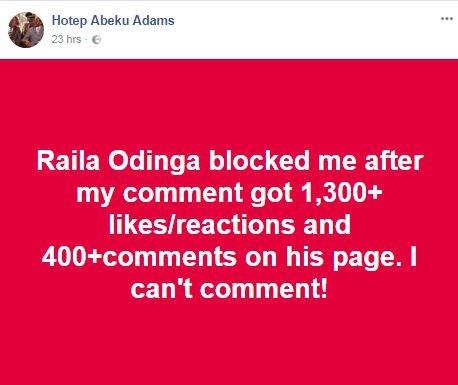 Last week, Raila Odinga, declared himself the “people’s president” at a controversial “swearing-in” ceremony in the capital, Nairobi.

Thousands of his supporters attended the event, despite a government warning that it amounted to treason.
The authorities shut down TV stations to prevent live coverage of the event.

President Uhuru Kenyatta was sworn in for a second term last November. He won an election re-run in October, but Mr Odinga boycotted it. 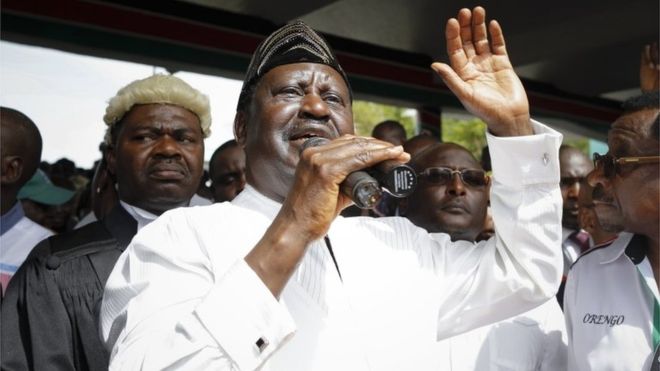 Elections were first held in August but the courts ordered a re-run, saying Mr Kenyatta’s victory was marred by irregularities.

Kenyatta was officially re-elected with 98% of the vote on 26 October but just under 39% of voters turned out. He was inaugurated in November.

His victory is not recognised by Mr Odinga, who argues he was elected by a small section of the country.
Mr Kenyatta also won the original election on 8 August but that result was annulled by the Supreme Court, which described it as “neither transparent nor verifiable”.

When the repeat vote was called, Mr Odinga urged his supporters to shun it because he said no reforms had been made to the electoral commission.

Correspondents say the election dispute has left Kenya deeply divided. About 50 people are reported to have been killed in violence since the August ballot.

Many have suggested that Odinga’s stance is a recipe for violent clashes in Kenya as the government says Odinga’s action is treasonable.