A train under rehabilitation, on Monday evening, derailed around the Ghana Ports and Harbors Authority close to the eastern gate of the Fishing Habour area in Tema, after running into a trailer.

The collision occurred at the junction of the GHACEM road on Monday evening.

An eyewitness, who gave his name as Kwesi Appiah, told Citi News that an onlooker who rushed to the scene of the crash did not find any engineer or conductor in the train after the crash.

The train, with at least six coaches, however had its engine running. 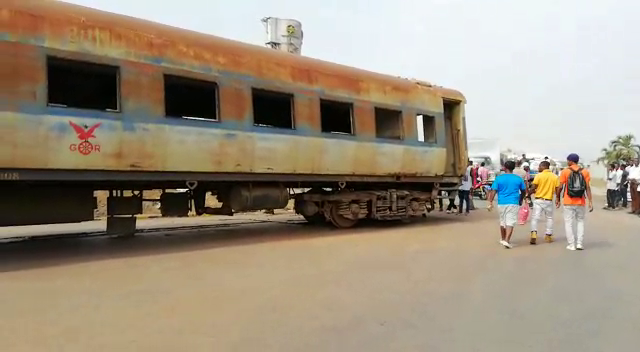 The Chief Executive of the Ghana Railway Authority, Richard Dombo, speaking on Eyewitness News later on, clarified that the collision occurred in a confined environment meant for the rehabilitation of old trains.

He reminded that train operations had been suspended between Tema and Accra since October 2017, following the derailment of a train at Achimota.

On the speculation that the train was running without a driver, Mr. Dombo added that initial reports indicated that the brakes of the train failed.

“It is not an automatic rain that moves on its own. In this context, it is a coach that was being rehabilitated that ought to be on its own, [supported by] an independent brake application or wedges… The brakes failed whiles it was in the shed. So when you say driverless train, it is a misrepresentation. It is as if a driver just abandoned ship and the train just went on its own way.”

Prof Allotey to be given state burial on February 23