A chlorine gas attack has been carried out on a besieged rebel-held enclave on the outskirts of the Syrian capital Damascus, reports say.

People in the Eastern Ghouta region, which is under daily bombardment, reported a smell of gas after a missile strike, the BBC has learned.

Some 400,000 locals have been under siege from Russian-backed government forces since 2013.

There have been a number of reports of chlorine gas attacks since Syria’s civil war broke out, but the government has always denied using chemical agents.

On 10 January the UN’s high commissioner for human rights said an upsurge in air strikes and ground attacks had killed at least 85 civilians in Eastern Ghouta since 31 December.

“In Eastern Ghouta, where a crippling siege has caused a humanitarian catastrophe, residential areas are being hit day and night by strikes from the ground and from the air, forcing civilians to hide in basements,” Zeid Ra’ad al-Hussein said in a statement.

The Eastern Ghouta region is strategically important, as rebels based there are able to fire rockets into residential neighbourhoods of Damascus. This has also caused civilian deaths, according to state media. 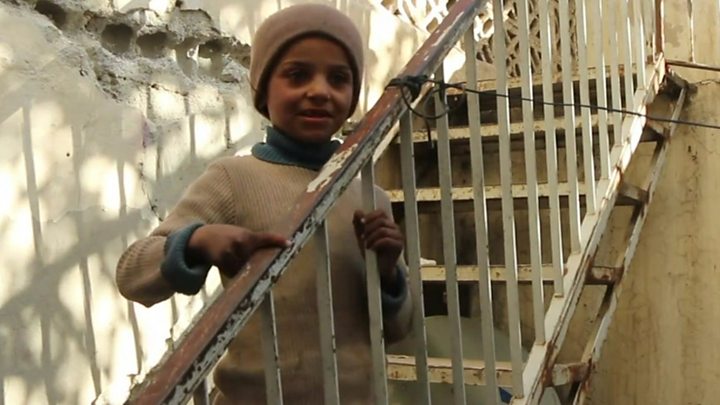 Yusuf Ibrahim, a teacher who now lives underground in the rebel-held town of Harasta, just outside Eastern Ghouta, described the situation there.

“Today is not so difficult as it was yesterday because there are no warplanes or any raids till now, just heavy artillery bombardments … like surface-to-surface rockets, which are targeting the buildings and the population in Harasta,” he told the BBC.

“The inhabitants of the city are all underground, living in the basement or the cellars because of such heavy bombardment.

“There is no means of life such as markets or good services.”

An adviser to a coalition of medical charities told the BBC the attacks had been the most intense for a year.

Food shortages have led to many cases of severe malnutrition, and a UN report in November said some residents in Eastern Ghouta had been reduced to eating animal fodder and even rubbish.

Several are reported to have died of starvation.

Eastern Ghouta is one of several “de-escalation” zones in Syria announced by Russia, Iran and Turkey in 2017.

Despite that, the area has remained under bombardment. Troops and allied militia have also shut many of the routes used to smuggle in food and medicine, leaving residents dependent on irregular aid deliveries.