The parties, in a meeting convened at the Flagstaff House on Tuesday, reaffirmed their commitment to the full implementation of the project which was commissioned by former President John Mahama in January 2017.

[contextly_sidebar id=”KqyfWdY8vqNjhvqss7hSY2TibAVDA2Ir”]The world-class medical centre had been abandoned following a tussle between the Ministry of Health and the University of Ghana over the control of the facility.

This is despite the full installation of all the necessary medical equipment for operations at the facility to commence.

The 617-bed facility has ultra-modern medical gadgets for treating complicated medical conditions, and a helipad to airlift patients with emergency cases as well as a medical hotel. 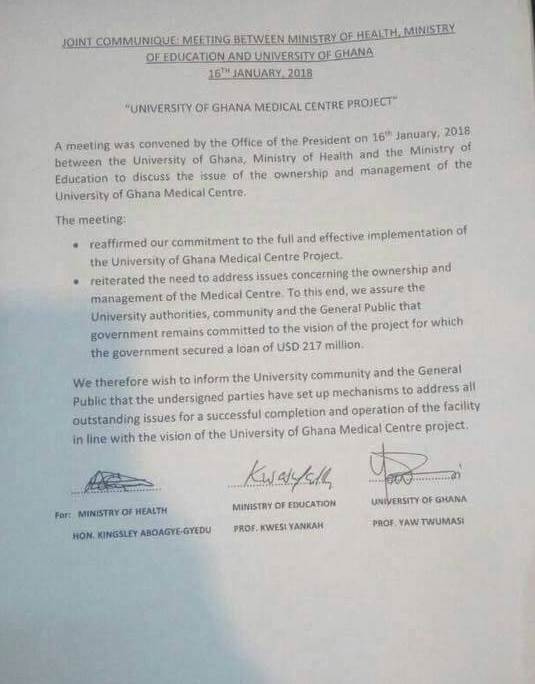 The government has said it remains committed to the vision of the project, for which it secured a loan of $217 million.

It assured the university community and the public of the successful completion and operation of the facility, in line with the vision of the project.

In a joint communique issued after the meeting, the three bodies reiterated the need to address issues concerning the ownership and management of the centre.

The government of Ghana in 2012 under the former President John Evans Atta-Mills entered into an agreement with Messrs Engineering and Development Consultant (EDC) of Israel to build the first phase of the Center.

According to former deputy Minister of Health, Rojo Mettle Nunoo, the original plan of the government was to allow the University of Ghana to manage the facility but the facility after its face phase was inaugurated by former President John Mahama on January 6, 2017 is still not in use because the Ministry of Health wants to take over its management.

Last week, cabinet gave a directive for the Ministry’s take over the facility, leading to some national security operatives storming the premises.

“The Ministry is taking over, just like it is mandated to ensure the health of the populace for national development. All health-related facilities in Ghana, both public and private all fall under the purview of the Ministry of Health, so it was strange for anybody to say that a particular hospital shouldn’t have the ministry of health coming close,” Robert Cudjoe said in a Citi News interview.

Meawnhile, a Deputy Minister of Health, Kingsley Aboagye Gyedu, has said an amount of 6 million US dollars is needed to begin operations at the University of Ghana Medical Centre.

According to him, the first phase of the Medical Centre, which cost 217 million dollars to establish, is yet to be completed because of the lack of funds needed for its operationalization.

“The hospital has not been officially handed over to the Ministry, it is not complete, as we speak now, the operationalization is not like the working capital, we need to put certain things in place before the hospital can be open to the public,” he said.
Speaking in an interview on the Citi Breakfast Show, Kingsley Aboagye Gyedu said his outfit also needs an additional 50 million US dollars to complete the second phase of the project.