Officials of the Economic and Organised Crimes Office, EOCO, led by the Director, ACP K.K. Amoah, today [Monday], stormed the offices of the Electoral Commission to forcefully remove  a Deputy Chairperson of the Commission in charge of Corporate Services, Georgina Opoku Amankwah, who resumed full official duties in defiance of a directive that asked her to stay away.

Madam Opoku Amankwah was directed to proceed on leave in July 2017, to enable investigations into the Ghc480,000 believed to have gone missing from the EC’s Senior Staff Endowment Fund.

[contextly_sidebar id=”Gxy8JzaIKMzWpBB45trVKN3u91S6v6fP”]Last week, she notified the investigative body, EOCO, of her intention to resume work even though the body is yet to release findings of its investigations. Citi News confirmed the letter, and EOCO’s receipt of same.

Sources close to the investigative body had also informed Citi News that EOCO was awaiting the advice of the Attorney General on how to proceed with its final report.

The Deputy EC Chairperson had thus been informed to wait a little longer as EOCO worked out its report. This response to the Madam Georgina Opoku Amankwah notwithstanding, she resumed duties today [Monday], after staying away for almost six months. 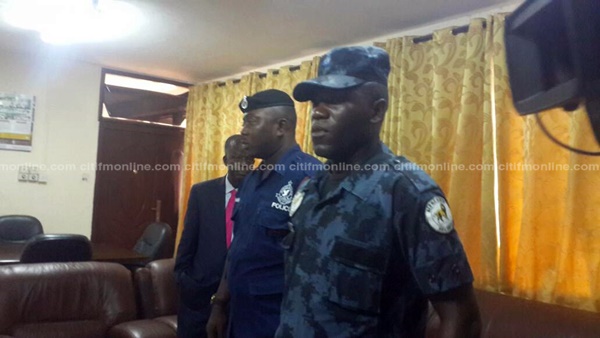 She told Citi News‘ Kojo Agyeman that she feels victimized since other Members of the Commission involved in the investigations are going about their official duties without hindrance.

Madam Amankwah has refused to leave her office, whiles three EOCO officials including the Director of EOCO, are behind her office doors seeking to get her out.

According to her, she received a call from the EOCO Boss this afternoon, asking why she had defied the earlier directive and reported to work.

The EOCO officials are standing by to lock up the office when she closes at 5:00pm, but the Madam Amankwah has as a result decided not to leave the office anytime soon.

In September 2017, EOCO confirmed that the money which went missing from the Electoral Commission (EC)’s Endowment Fund did not end up in the accounts of the officials of the EC under investigation.

However, the Executive Director of EOCO, K. K. Amoah, insisted that it was too early to conclude that the officials are innocent, given the mandate and access they had to the funds during the period.

EOCO commenced investigations into the activities of three officials of the EC; Georgina Opoku Amankwah, Chief Accountant, Kwaku Owusu Agyei-Larbi and Finance Officer, Joseph Kwaku Asamoah, after over 480,000 cedis went missing, resulting in the officials being asked to proceed on leave.

Speaking to Accra-based Peace FM, the Executive Director of EOCO, K. K. Amoah, stated that, investigations were far advanced into the matter, and that they were going to submit their findings to the Attorney General, which has since been done.

“It’s been suggested that the money was used for some work for the EC. If that’s the case, they should bring receipts and documents to prove it. We haven’t got any such documents from them. Without those documents, we’ll continue to pursue them. With time, we will pass the information on to the Attorney General to pursue the matter in court.”

K. K. Amoah also clarified that the officials under investigation were still on leave and had not been interdicted.

The Head of Communications at the EC, Eric Kofi Dzakpasu, stated in July 2017 that the three officials proceeded on leave in order to protect the integrity of investigations by EOCO

“What I know is that, EOCO is investigating matters related to staff endowment fund where we have some gap in the deposits which must be paid to the staff from the deductions of the staff. As a result of which EOCO has started investigations and all persons who are related to the issue have been called for questioning… The commission is fully cooperating with EOCO as far as this investigation is concerned,” he said

A letter, written to the Chair of the EC, Charlotte Osei, dated July 4th, 2017 from EOCO, said “the suspects are assisting in investigations.”

On December 19, 2017, the Chief Justice, Sophia Akuffo, formally constituted a committee to investigate the Chairperson of the Electoral Commission, Charlotte Osei, and her two deputies, over corruption allegations leveled against them, with a caution to the general public to desist from making demeaning comments about their work.

“The general public is hereby informed that, Her Ladyship the Chief Justice, Justice Sophia A.B. Akuffo, in accordance with Article 146 of the 1992 Constitution, has set up a five-member committee to investigate allegations brought against the Chairperson of the Electoral Commission, Mrs. Charlotte Osei, and her two deputies, Mr. Amadu Sulley and Mrs. Georgina Opopu-Amankwa.”

In a statement signed by the Judicial Secretary, Justice Alex B. Poku-Acheampong, the Chief Justice said anyone who makes comments that undermine the work of the Committee, will be cited for contempt.

In a release copied to citifmonline.com, the Judicial Secretary,  said the sittings of the Committee will be closed to the public.

The release, which failed to indicate the names of the Committee members, as well as state exactly when the Committee will start its work, said it will be chaired by a Justice of the Supreme Court.

Some of the allegations involved the unilateral award of contracts by the EC boss in the run-up to the 2016 general election. The unnamed EC staff are being represented by Lawyer Maxwell Opoku-Agyemang, against Mrs. Osei.

The petition against her, alleged among others the funneling of GH¢3.9 million to partition an office, the receipt of a Toyota Land Cruiser from the Mahama government, and the use of about $14 million when the Public Procurement Authority had authorized her to use only $7.5 million.

Subsequently, another individual by name Douglas Seidu, a concerned Ghanaian, also petitioned the President in August 2017, seeking the removal of the EC Chair, on grounds of “financial misconduct, incompetence, conflict of interest, breaches of the public procurement processes, amongst others.

It is an eight-paged petition” according to the Director of Communications at the Presidency, Eugene Arhin, who spoke to Citi News in August.

Suggestions are that both petitions have been consolidated to make the Committee’s work easier.