The African Group of Ambassadors to the United Nations is demanding a retraction and apology from United States President, Donald Trump after he allegedly called African nations “shithole countries”.

In a statement released after an emergency session, the group said it was “extremely appalled at and strongly condemns the outrageous racist and xenophobic remarks attributed to the president of the United States of America as widely reported by the media.”

[contextly_sidebar id=”ztlo66KOLgQtyIu58NP9IOhJiA0lN7ir”]The group also said it was concerned at the “continuing and growing trend from the US administration towards Africa and people of African descent to denigrate the continent and people of colour.

It concluded by reaffirming its commitment to the values of “multilateralism, diversity and equality of nations as enshrined in the relevant African Union and UN charter and instruments.”

It was first reported by the Washington Post that Trump had called some nations on the continent ‘shithole countries.’

The alleged remarks were said to have also been made in reference to Haiti and El Salvador.

According to a Democrat Senator, Dick Durbin, Trump, during a meeting at the White House to consider migrant policies, said, “Why are we having all these people from shithole countries come here?”

President Trump has since rejected the claims against him in a series of tweets but White House communicators have however failed to categorically deny that he made those comments.

There was global outrage after the Washington Post reported the alleged comments from President Trump with many, including Former President John Mahama describing the US leader as a racist. 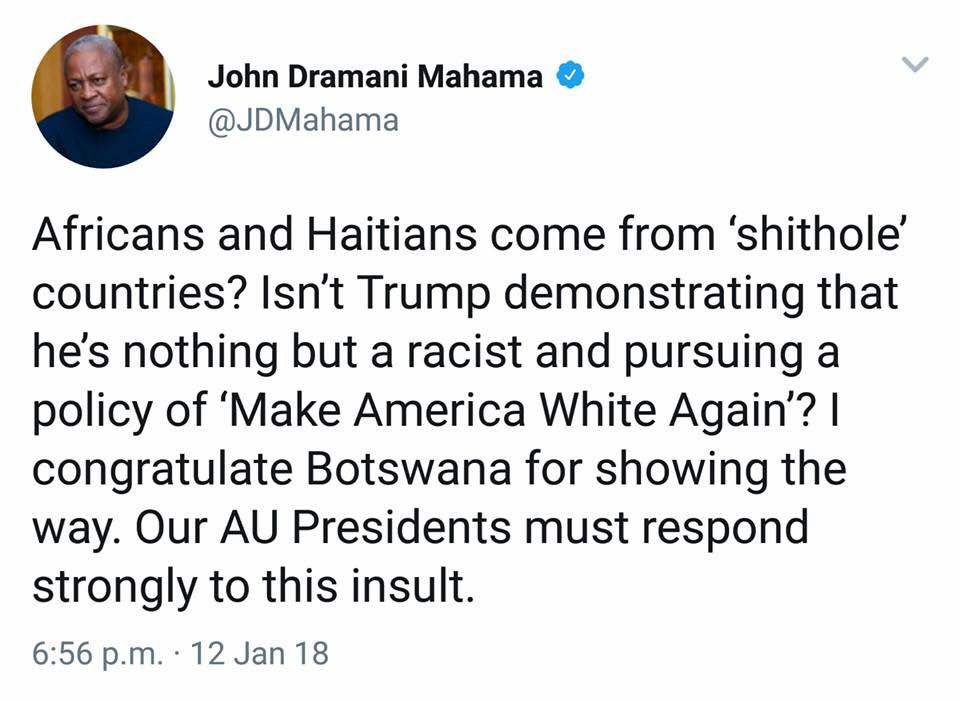 The African Union has also said it was alarmed by President Trump’s remarks and issued a statement calling for the US leader to apologise for the remarks.

It said the “remarks dishonor the celebrated American creed and respect for diversity and human dignity”.

“While expressing our shock, dismay and outrage, the African Union strongly believes that there is a huge misunderstanding of the African continent and its people by the current Administration,” the AU added.

It also said there was a serious need “for dialogue between the US Administration and the African countries.”