President Nana Akufo-Addo has revealed that, about $5 billion dollars were unaccounted for in gold exports from Ghana to the United Arab Emirates.

Speaking during an interaction with the media on Wednesday, he recalled that the Senior Minister, on an official visit to the Dubai in the United Arab Emirates, received some praise from people who said: “last year we [UAE] recorded $7 billion worth of Gold imports from Ghana.”

[contextly_sidebar id=”qZbH4UsB0GLmOfF2FfYJmDa68mjjCoTH”]But the President stated that “official records are talking about $2 billion. These are the facts.”

Responding to a question on the fight against illegal mining and resulting ban on small-scale mining, President Akufo-Addo said outstanding issues related to illegal mining, including this instance of suspected smuggling still needed to be addressed.

“I believe that the fight against galamsey is by no means won. We still have a long way to go… I am saying this because, at the same time, some of the outcomes of the galamsey menace in our country are not sufficiently addressed or articulated.”

“…So it is telling you that apart from the harm that this activity is doing to our country, much of the value that our nation should derive from these activities are also being criminally disposed off,” he added. 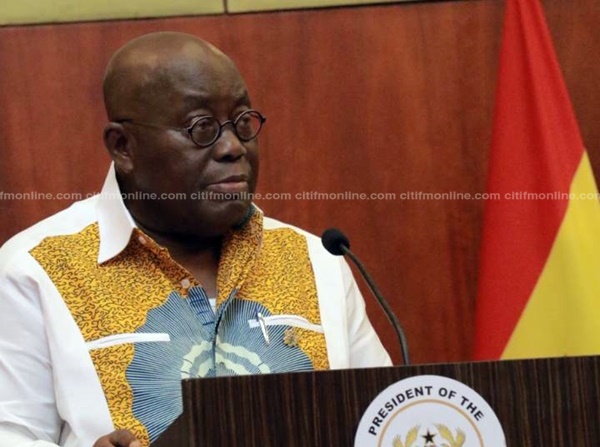 On the possible lifting of the ban on small-scale mining, which was extended after first being imposed in April 2017 for three months, President Akufo-Addo said he was yet to meet with advisers, and “decide when, and if the time is ready for the lifting of the ban. So a decision will not be ready until after that meeting of Cabinet next week.”

In September 2017, it emerged that the Precious Minerals Marketing Company (PMMC), at the time, could not trace most of the companies involved in the export of $2.3 billion worth of gold in 2016, that did not result in the repatriation of foreign currency.

Indications were that the Criminal Investigations Department of the Ghana Police Service had begun a probe into the matter which is said to involve about 145 companies.

The PMMC is mandated to oversee the export of gold from the small-scale mining sector, and the law requires at least 80 percent of foreign currency earned from exports to be repatriated into the country

The PMMC’s operations cut across buying, selling, grading, valuing, and processing of precious minerals to include appointing licensed buyers for the purchase of minerals mined by small-scale miners.