Real – only above fifth-placed Sevilla on goal difference before kick-off – led through Nacho’s close-range effort.

Ronaldo had only scored two La Liga goals all season before converting Marco Asensio’s through ball and then scoring a penalty.

Toni Kroos finished off a great move and set up Achraf Hakimi for the fifth.

With all the goals coming in the first half, Real eased up after the break and Sevilla never threatened any kind of comeback. 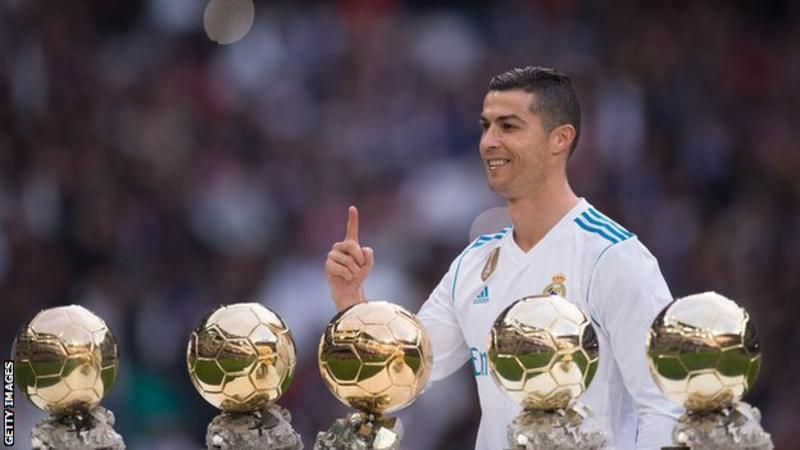 On Wednesday, Ronaldo scored in a 3-2 win against Borussia Dortmund to become the first player to score in all six Champions League group games in a season, netting nine in those six.

The next day, he won his fifth Ballon d’Or – the award for the best player in the world, taking him level with Barcelona and Argentina forward Lionel Messi’s all-time record.

And on Friday, his manager Zinedine Zidane – himself the 1998 Ballon d’Or winner – said Ronaldo was the “best player in the history of football”.

But in La Liga this season, he has struggled – scoring only twice in 10 league games – despite his free-scoring European exploits.

But those problems were forgotten on Saturday as he finished Asensio’s brilliant pass and then scored a penalty – which squeezed under keeper Sergio Rico – after Jesus Navas’ handball.

He even won the ball in his own half to set up the move for Kroos’ fourth goal and had a hand in Hakimi’s fifth.

Real look back to their best

Real – who head off to the Fifa Club World Cup for their semi-final against Al Jazira on Wednesday – have struggled to live up to last season’s double-winning exploits.

They came into this game eight points behind leaders Barcelona, knowing a defeat by Sevilla would see them drop into fifth behind their opponents.

But they dominated right from kick-off.

Real were without their two first-choice centre-backs – the banned Sergio Ramos and suspended Raphael Varane – but stand-in Nacho put them ahead in the third minute, converting Kroos’ corner.

Ronaldo then scored twice – before two brilliant team goals. The Portuguese won the ball and played it to Kroos, who ran from halfway before passing to Lucas Vazquez, who crossed for the Germany midfielder to guide the ball home.

And Ronaldo then passed to Kroos, who in turn found young right-back Hakimi in a position to score his first goal for the club.

They eased up after the break, but nearly had a sixth when Karim Benzema header from Marcelo’s came back off the post.