The well-built men slapped and hit GhanaWeb’s cameraman to the floor.

Citi FM’s Marie-Franz Fordjoe and journalists from TV3 and Ghanaweb, were on Thursday attacked by some irate youth of the governing New Patriotic Party, NPP.

Following up on hints of an ongoing protest at the party’s national headquarters in Accra, the reporters headed there.

Upon their arrival, scores of the party’s members, numbering about 200 from the Ellembelle Constituency in the Western Region, had besieged the headquarters demanding a clean register ahead of the party’s internal elections in January 2018.

Whilst filming the happenings, they were attacked by about six well-built men who are security guards at the party’s head office.

GhanaWeb’s cameraman was slapped, thrown on the ground and kicked mercilessly by the ‘macho’ men.

When the issue was reported to the NPP Deputy General Secretary, Sam Payne upon his arrival at the scene, he retorted that, “no one asked him [the reporter] to come and film” and walked away.

Efforts by onlookers and the protesters were simply insufficient to calm the anger and energy with which the security guards were manhandling the cameraman.
TV3’s reporter earned slaps, after which his phones and other equipment were seized.

Citi FM’s reporter was also attacked by a female party loyalist and the ‘macho’ men. Her spectacles were broken, whereas her phones and bag were seized.  She later was given back her items.

The Ellembelle protesters, who tried protecting the journalists, were also attacked.

About two of the protesters received slaps as a result, and one other person, sustained injuries, including a burst lip and a broken nose.

Ghanaweb’s cameraman complained of blurred vision and pains. Such offenders are often not punished, supposedly due to political affiliation with the governing party.

The defiant protesters insist on a clean register, as they allege some fraudulent activities in their constituency will mar the voting in January. 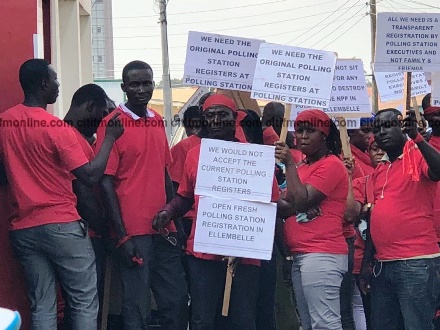 The governing party is expected to go to the polls in January 2018, to elect polling station executives. As part of that, all party members are to have their names captured on the party’s register by December 25, 2017.

According to the livid NPP members, their constituency’s party chairman, Samuel Akenya, has refused to make available the original registers to the 16 polling station officers.

They claimed the Constituency Chairman has instead made available other forms for the registration process which he will collate all registered names himself.

In the view of the constituents, this is a ploy to manipulate the election of party executives at the constituency level, through to the national level.

Speaking to Citi News at the NPP headquarters today, Thursday, the Communications Director for the group, Felix Dickson, said directives from the police and the Criminal Investigations Department (CID) to Samuel Akenya to release the original register, have yielded no results hence their action. 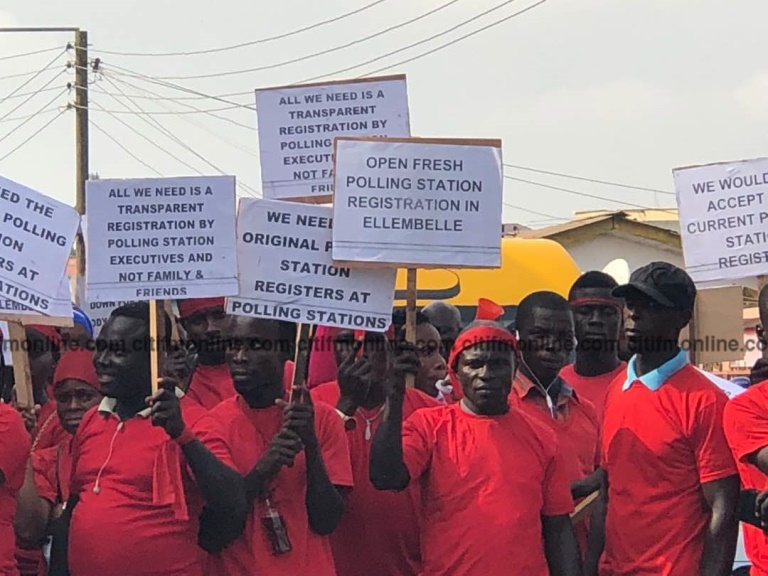 The group has been at the NPP headquarters since 5:00am, and is yet to meet any national party executive to whom, they can present their petition.

The leadership of NPP over the weekend shot down some three ‘controversial’ proposals submitted for amendment to the party’s constitution.

President Akufo-Addo, while addressing party delegates at Kumasi in the Ashanti Region at the party’s Extraordinary National Delegates’ Conference said some of the proposed amendments “will be a disaster” if adopted.

The proposals included suggestions for Members of Parliament to appoint constituency executives, party members with dual citizenship to be disqualified from contesting for any party position and for the flagbearer of the party to be considered as the leader of the party

Ghana votes against US on Jerusalem despite threat to cut funding