May in Brussels for crucial Brexit meeting

Theresa May has arrived in Brussels following overnight talks on the issue of the Irish border.

Details of an agreement are expected to be set out at a joint news conference within the hour.

If the border question has been settled, talks can move on to the future of trade after Brexit.

The BBC’s Laura Kuenssberg was told last night that there were “serious ideas” on the table that the different parties were broadly content with.

Additional wording is understood to have been added to reassure the DUP, whose opposition on Monday led to talks breaking down.

The leader of Northern Ireland’s Democratic Unionist Party, Arlene Foster, said on Friday she was “pleased” to see changes which mean there is “no red line down the Irish sea”.

On Thursday evening, European Commission spokesman Margaritis Schinas tweeted: “We are making progress, but not yet fully there,” adding: “Tonight more than ever, stay tuned.”

In the early hours of Friday, the prime minister’s chief of staff, Gavin Barwell, tweeted: “Home for 3 hours sleep then back to work”, without offering any further details.

All sides want progress on the issue ahead of a crucial summit next week, so talks can move on to the future relationship between the UK and the EU after Brexit. 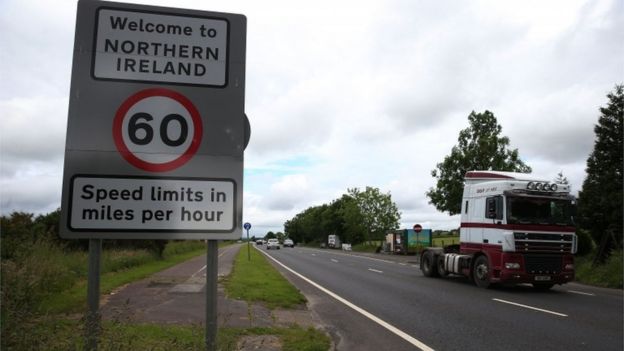 What happens to the border between Northern Ireland and the Republic of Ireland has been among the key sticking points in Brexit negotiations.

On Monday, the DUP – whose support the UK prime minister needs to win key votes in Westminster – objected to draft plans drawn up by the UK and the EU.

They included aligning regulations in Northern Ireland with those in the Republic so as to avoid border checks.

The DUP insists it will not accept any agreement in which Northern Ireland was treated differently from the rest of the UK.

The Republic of Ireland, on the other hand, which is an EU member, wants a guarantee that there will be no hard border between it and Northern Ireland after Brexit.

The UK, which is due to leave the EU in March 2019, wants to open talks on a new free trade deal as soon as possible.

The EU will only agree to discuss this when it judges that enough progress has been made on the “separation issues” – the “divorce bill”, expat citizens’ rights and the Northern Ireland border – that have been the subject of negotiations so far.

So the UK is trying to settle the Northern Ireland border issue before EU leaders meet next week.