The agreement is part of Germany’s G-20 Compact with Africa programme for sustainable economic development.

Ghana’s Finance Minister Ken Ofori-Atta, and Germany’s Deputy Minister for Economic Cooperation and Development, Friedrich Kitschelt, signed the agreement under the auspices of President Akufo-Addo and the visiting German President Frank-Walter Steinmeier at the Flagstaff House in Accra.

The partnership with Ghana is geared towards improving conditions for sustainable private sector investment, investment in infrastructure, economic participation, and employment in the country.

Addressing the press after the signing ceremony, President Akufo-Addo warmly welcomed Mr. Steinmeier to Ghana, optimistic that his visit to the country would “renew the friendship and advance the dialogue that has been between our two countries.” 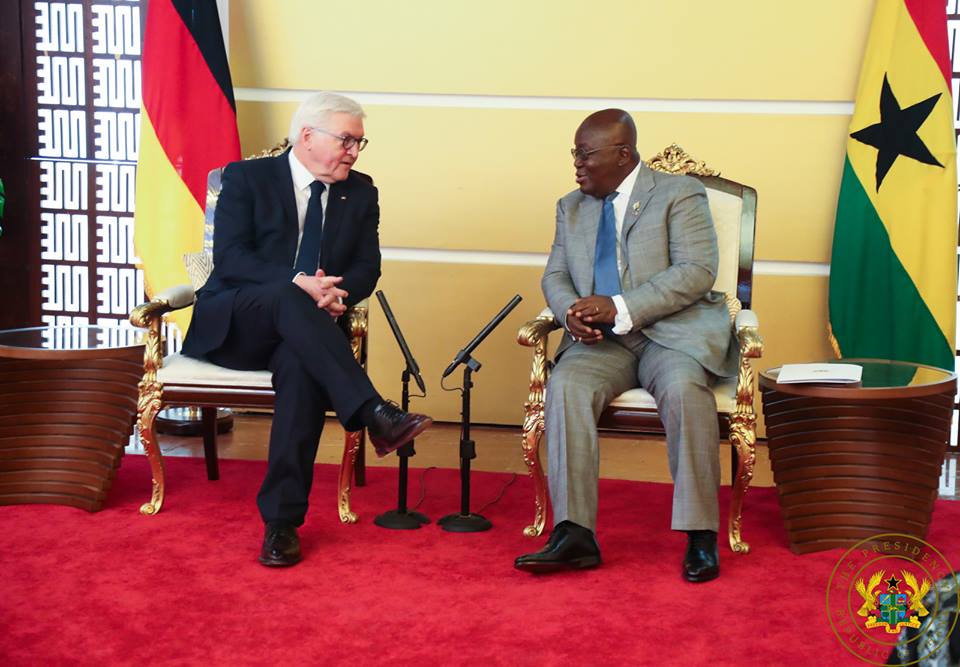 With Ghana being the third largest trading partner of Germany in Sub-Saharan Africa, the President said the relations between the two nations had been excellent, with many important features of commonality between both states.

President Akufo-Addo said the German economy had been distinguished by the prevalence and importance of small and medium scale enterprises, a rich experience Ghana could exploit to scale up and strengthen the sector to revamp its economy.

The President noted further Germany’s leading role in the training of its workforce had made that country’s workforce one of the most efficient in the world “and it shows in the continuous performance and resilience of the German economy.”

“This is another area of great concern for us – the whole area of skills development and training for our workforce and for our young people,” he said.

The President told the German leader that his government’s main priority was the enhancement of education, which would ultimately scale up the capacity and competence of Ghana’s workforce.

Germany, he noted, was an important world leader in the area of renewable energy, an area that held extreme importance and concern for Ghana, and which the country hopes to find “a meaningful intercourse with Germany.”

President Akufo-Addo stated further that there were many other areas of international concern where Ghana and Germany “stood shoulder to shoulder in our view of issues about terrorism.”

“And above all, we have taken a great deal of inspiration from the commitment of Germany’s leaders in supporting the options that Ghanaians have taken to assume greater responsibility for their economic development.”