Charlotte Osei with a lawyer at the Supreme Court.

Citi News can confirm that a prima facie case has been established against the Electoral Commission Chairperson, Charlotte Osei, following allegations of corruption and abuse of office levelled against her in two separate petitions.

Her two deputies, Amadu Sulley (in charge of Operations), and Georgina Amankwa (in charge of Corporate Services, will also have a case to answer for their alleged roles in the disappearance of some Ghc480, 000 from the Electoral Commission (EC)’s Endowment Fund, among other allegations.

The three top EC officials today [Monday], appeared individually before the Chief Justice in the company of their lawyers, at the office of the Judicial Service located at the Supreme Court.

Charlotte to answer for only 6 allegations out of 27

In the case of the EC Chairperson, Charlotte Osei, Citi News sources say out of the 27 allegations made against her, only six of them were deemed valid, for which she would have to answer before the committee. 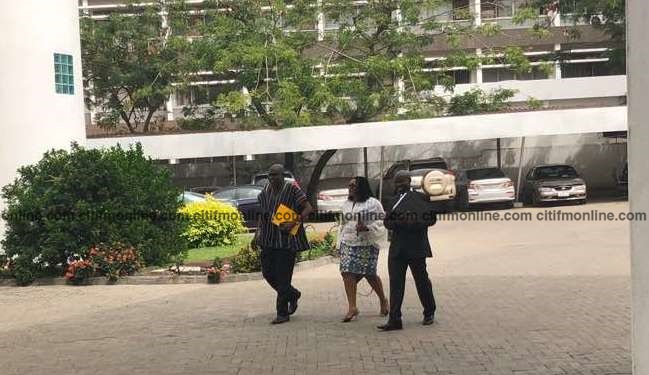 A prima facie case is the establishment of a legally required rebuttable presumption, and a cause of action or defense that is sufficiently established by a party’s evidence to justify a verdict in his or her favour, provided such evidence is not rebutted by the other party.

The latest development means that, the Chief Justice will be preparing to officially inaugurate a five-member committee which will have three superior court judges and two ordinary citizens as members.

The Chief Justice and the Judicial Council, may now recommend to the President of the Republic the suspension of the EC Chair from her position, to enable her undergo the hearing, who will either approve it or not.

Already, one of the deputies, Georgina Opoku Amankwa, is serving a suspension over the issues brought against her by the EC Chairperson, Charlotte Osei.

Charlotte Osei among others, accused deputy Chairperson of the Commission of illegally signing contracts worth over GHC 40 million without her approval.

Subsequently, another individual by name Douglas Seidu, a concerned Ghanaian, also petitioned the President in August 2017, seeking the removal of the EC Chair, on grounds of “financial misconduct, incompetence, conflict of interest, breaches of the public procurement processes, amongst others. It is an eight-paged petition” according to the Director of Communications at the Presidency, Eugene Arhin, who spoke to Citi News in August.

President Akufo-Addo in accordance with the constitution forwarded both petitions to the Chief Justice to look into the matter.
Suggestions are that both petitions have been consolidated to make the committee’s work easier.

The Coalition of Domestic Elections Observers (CODEO) recently expressed reservations about the silence of the agencies investigating the disappearance of money from the Electoral Commission (EC)’s Endowment Fund.

According to the Coalition, it is imperative that the country’s election supervisory body is free from any issues that might raise doubts about the EC’s integrity. Reports are that EOCO has concluded its probe into the matter, after the suspects were asked to proceed on leave.

Money not in officials’ accounts

EOCO revealed in September that, the money which went missing from the EC’s Endowment Fund did not end up in the accounts of the officials being investigated.

They however insisted that it was too early to conclude that the officials are innocent, given the mandate and access they had to the funds during the period.

Speaking to Accra-based Peace FM, the Executive Director of EOCO, K. K. Amoah, at the time, stated that, investigations were far advanced into the matter, and that they would submit their findings to the Attorney General very soon. “We are still on the case. I met with my colleagues and we noticed that, the money did not end up in the accounts of the officials, so right now it is missing,” he said.

“It is too early to conclude anyone is innocent because [Georgina Opoku Amankwah] was in charge of the Endowment Fund and [Asamoah] was the auditor at the time. In a few days, we’ll make our determinations.”

“It’s been suggested that the money was used for some work for the EC. If that’s the case, they should bring receipts and documents to prove it. We haven’t got any such documents from them. Without those documents, we’ll continue to pursue them. With time, we will pass the information on to the Attorney General to pursue the matter in court.”
–
By: Ebenezer Afanyi Dadzie/Fred Djabanor/citifmonline.com/Ghana

Trasacco residents offer to pay for direct route to Motorway