The Chairperson of the Electoral Commission, Charlotte Osei and her two deputies, have arrived at the office of the Judicial Service located at the Supreme Court, as the Chief Justice prepares to hear a petition filed against the EC boss’ office.

Unconfirmed reports suggest that a five-member committee has been set up by Chief Justice Sophia Akuffo, to investigate the alleged acts of corruption involving the Electoral Commission Chair, and her two Deputies, Amadu Sulley (in charge of Operations) and Georgina Amankwa (in charge of Corporate Services. 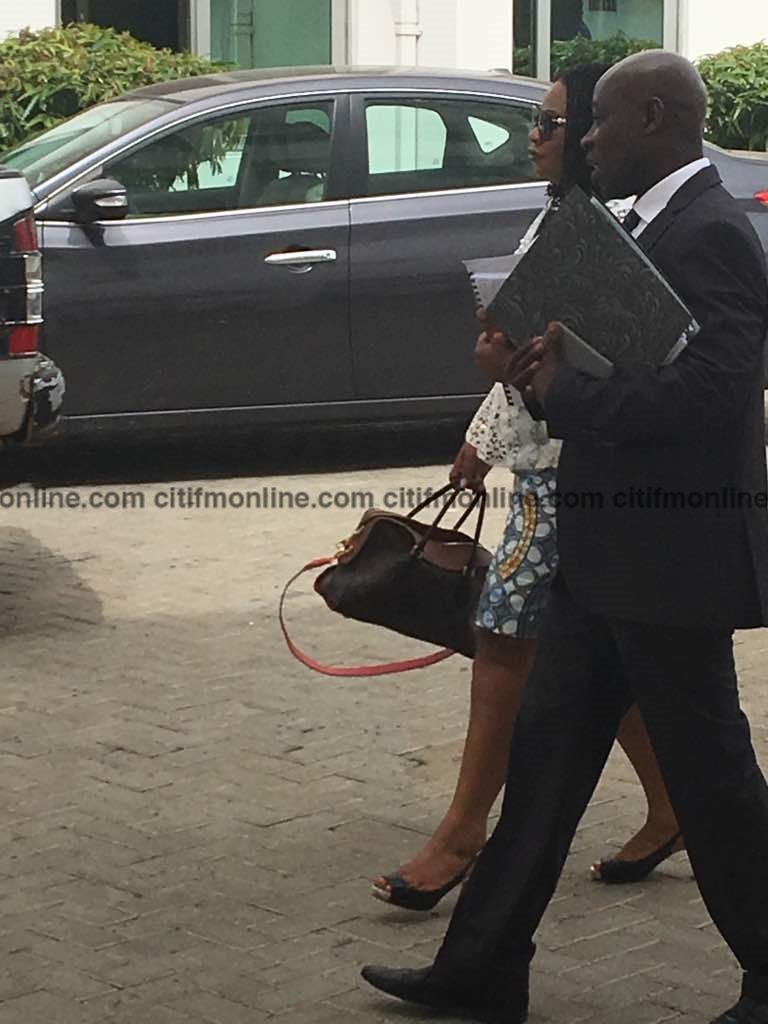 The unnamed EC staff, are being represented by Lawyer Maxwell Opoku-Agyemang, against Mrs. Osei.

The petition against her, alleged among others the funneling of GH¢3.9 million to partition an office, the receipt of a Toyota Land Cruiser from the Mahama government, and the use of about $14 million when the Public Procurement Authority had authorized her to use only $7.5 million.

Charlotte Osei among others, accused deputy Chairperson of the Commission of illegally signing contracts worth over GHC 40 million without her approval.

Subsequently, another individual by name Douglas Seidu, a concerned Ghanaian, also petitioned the President in August 2017, seeking the removal of the EC Chair, on grounds of  “financial misconduct, incompetence, conflict of interest, breaches of the public procurement processes, amongst others. It is an eight-paged petition ” according to the Director of Communications at the Presidency, Eugene Arhin, who spoke to Citi News in August.

Suggestions are that both petitions have been consolidated to make the committee’s work easier.

Deal with Charlotte Osei petitions to save EC’s integrity – Inusah

The Ranking Member on the Constitutional, Legal and Parliamentary Affairs Committee of Parliament, Inusah Fuseini, recently called on the Chief Justice to hurriedly determine whether a prima facie case has been established against the Chairperson of the Electoral Commission (EC) Charlotte Osei, in order to clear any lingering doubts about the integrity of the Commission’s leadership.

According to him, there is a risk of “paralyzing” the EC from carrying out its constitutionally mandated functions if the allegations against the EC Chair and other officials of the Commission are allowed to fester without any timely resolution.

The Coalition of Domestic Elections Observers (CODEO), also expressed reservations about the silence of the agencies investigating the disappearance of money from the Electoral Commission (EC)’s Endowment Fund.

According to the Coalition, it is imperative that the country’s election supervisory body is free from any issues that might raise doubts about the EC’s integrity. Reports are that EOCO has concluded its probe into the matter, after the suspects were asked to proceed on leave.

Money not in officials’ accounts

EOCO revealed in September that, the money which went missing from the EC’s Endowment Fund did not end up in the accounts of the officials being investigated.

They however insisted that it was too early to conclude that the officials are innocent, given the mandate and access they had to the funds during the period.

Speaking to Accra-based Peace FM, the Executive Director of EOCO, K. K. Amoah, at the time, stated that, investigations were far advanced into the matter, and that they would submit their findings to the Attorney General very soon.

“We are still on the case. I met with my colleagues and we noticed that, the money did not end up in the accounts of the officials, so right now it is missing,” he said.

“It is too early to conclude anyone is innocent because [Georgina Opoku Amankwah] was in charge of the Endowment Fund and [Asamoah] was the auditor at the time. In a few days, we’ll make our determinations.”

“It’s been suggested that the money was used for some work for the EC. If that’s the case, they should bring receipts and documents to prove it. We haven’t got any such documents from them. Without those documents, we’ll continue to pursue them. With time, we will pass the information on to the Attorney General to pursue the matter in court.”