‘My daughter was happy I lost’ – Mahama reveals

Eleven months after handing over power to President Nana Addo Dankwa Akufo-Addo, former President John Mahama has been opening up about some of the things that transpired after he handed over power.

In one of the revelations, the former President mentioned that, his nine-year old daughter, Farida Mahama, was very happy that he lost the December 7 general elections.

According to John Mahama, his daughter was excited because she will be seeing him [Mahama] more often.

John Mahama said whilst he served in the highest office of the land, he hardly saw his daughter because he comes home late and leaves very early the following day, adding that sometimes he goes a whole week without seeing Farida.

Former President John Dramani Mahama made the revelation on Thursday when he delivered a lecturer during a graduation ceremony at the Institute of Security Studies in Abuja, Nigeria. 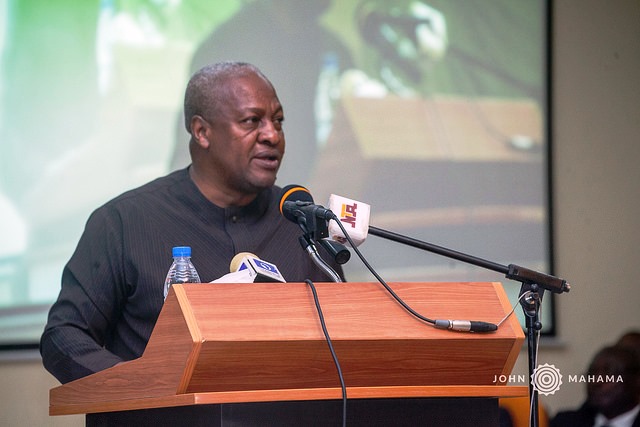 No office to go to

Mahama at the ceremony said: “I remember the day after I had handed over – this was the 8th of January – I woke up in the morning and remembered there was no Office to go to.”

“So, I relaxed in my bed and turned on the TV, watching CNN.I spent the whole day watching TV at the time Donald Trump was the President-elect, and they were going through the transition, waiting to hand over; so, I just kept watching what was going on,” he added.

The former president said whilst he was cooling off, his 9-year-old daughter who he barely spent time with as President, enquired why he was still at home and had not gone to work.

“My daughter, Farida, who had gone to school in the morning, arrived in the afternoon. She found me lying in bed which was unusual, because when I was President we could go a whole week without seeing each other.”

“She leaves the house early in the morning to be able to get to school on time, by which time I probably had not gotten out of bed. She gets back home late afternoon and I am in the Office and I get back in the night when she is asleep. So, we could go the whole week without seeing each other. For the first time, she came back from school and there I was lying on my bed and watching television.”

Below is what ensued between John Mahama and his daughter:

Farida:  Daddy, didn’t you go to the Office?

John Mahama: No, don’t you remember that I handed over to President Akufo-Addo yesterday?

Farida: OK; so it means you are not going to the Office anymore?

John Mahama:  No, I have no Office to go to

Farida: Then I am happy!  So will I be coming home from school and meeting you in the house?

Farida: Then I am very happy that you lost the elections!

The former President also noted that, ever since he left office, he has also been preoccupied with international assignments, speaking at different fora, including mediating the political impasse in The Gambia as well as monitoring elections in Kenya and Liberia.