President Akufo-Addo-holding bilateral talks with the Queen of Denmark

President Nana Akufo-Addo used his meeting with the Queen of Denmark, Her Majesty Margrethe II, to advocate for stronger trade and investment relations with Denmark.

Referencing Ghana’s long history with Denmark, dating as far back as the 17th century, the President said “we are looking forward to developing those relations, and we hope your visit will help cement a new relationship between our two countries.”

President Akufo-Addo made these comments as he held bilateral talks with Queen Margrethe II at the Flagstaff House as part of the Danish monarch’s three-day visit to the country. 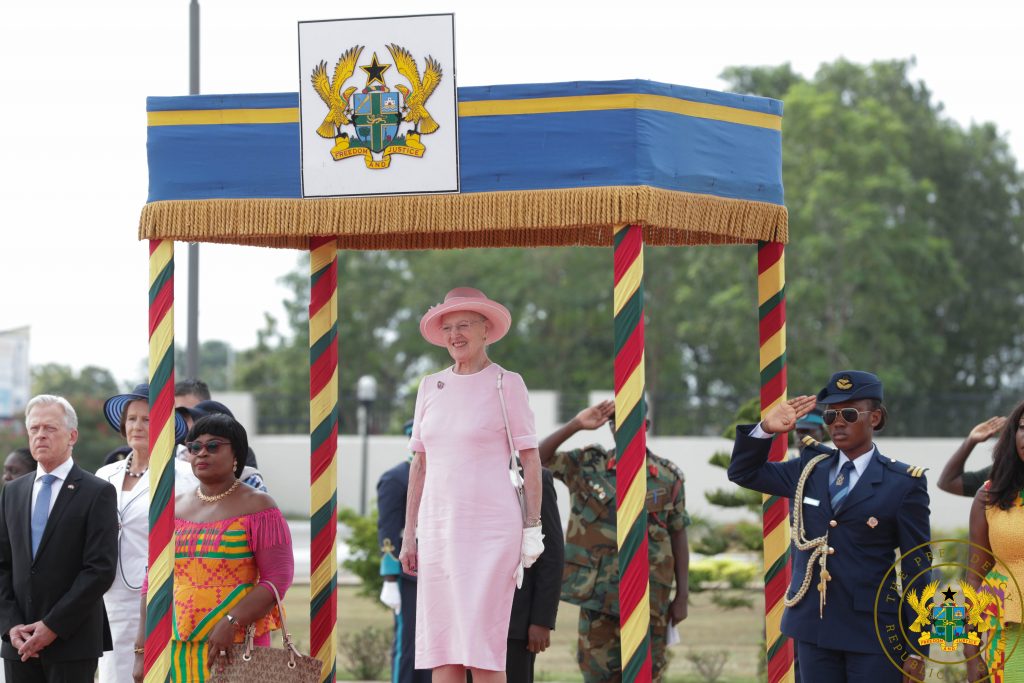 Queen Margrethe II is the first Danish Monarch to visit Ghana, and she was accompanied by a large business delegation from Denmark.

President Akufo-Addo reiterated his Ghana beyond aid pledge, saying developing good trade and investment relations with Ghana’s partners was a step in the right direction.

“Increasingly, the focus of Ghanaian policy is to accentuate economic partnership between our partners, to ensure that businessmen  and women can get together and invest in our country, and Ghanaian business people, if they can, also invest in [countries like] Denmark,” the President said.

“Denmark has been a solid ally, friend and partner of Ghana. There are so many areas of our national life which have been affected by the generosity of the Danish people, and the co-operation development area encompasses many areas.”

The support from Denmark “is a support we treasure and value”, President Akufo-Addo said as he assured Queen Margrethe II that the support “has been put to good use.”

The queen of Denmark, Her Majesty Margrethe II today [Thursday], November 23, 2017, paid a courtesy call on the Osu Mantse, Nii Okwei Kinka Dowuona VI, at his palace, as part of activities marking day one of a three-day historic state visit to Ghana.

She made her second stop at the Osu castle, where she met with members of the national and regional house of chiefs, and also witnessed a book launch by celebrated archaeologist, Professor Henry Wellington.

The Osu Castle was noted as the base for Danish power in West Africa, and the centre for slave trade to the Danish West Indies. The queen’s last stop was at the Arts and Design Centre where she met award-winning sculptor, Constance Elizabeth Swaniker.

Ghana and Denmark have enjoyed strong diplomatic and commercial ties over the years, and this visit by the Queen, who will be joined by representatives of Danish companies and business organizations, is further aimed at strengthening same.

With Ghana’s graduation to a middle-income country and the prospects of sustainable economic growth, Denmark is gradually transitioning from development aid to trade cooperation, in line with the vision of the Government of Ghana.

Facts about Ghana and Danish exports:

•The Danish International Development Assistance (Danida) has been active in Ghana since 1989, but the Danish development aid will now be phased out and cease entirely in 2020, as Ghana became a middle income country in 2011.