A new survey by research network, Afrobarometer, has revealed that 27 percent of Ghanaians believe that “most or all” of the officials working at the Presidency, including President, are corrupt.

[contextly_sidebar id=”pqGBUumtZYPOzH07JdLYWPWzhzFmczSO”]According to Afrobarometer, their team in Ghana interviewed 2,400 adult Ghanaians between September 9 and 25, 2017.

The Round 7 report launched by the CDD on Tuesday, which studied the perception of corruption about officials and personalities in the public and private sector,  also indicates that 59 percent of Ghanaians believe all or most police officers are corrupt.

Only three percent of the respondents believed that no police officer has engaged in acts of corruption.

“Six in 10 Ghanaians (59%), say most or all police officials are corrupt, and substantial proportions say the same about judges and magistrates (38%), national government officials (35%), and other public leaders. Perceptions of corruption in the private sector are somewhat lower,” the report said.

The figure is slightly lower for judges and magistrates with 38 percent of Ghanaians believing that all or most judges are corrupt.

32 percent of Ghanaians believe that all or most Members of Parliament are corrupt, while 31 percent of the respondents held the same view for Metropolitan, Municipal and District Chief Executives (MMDCEs). 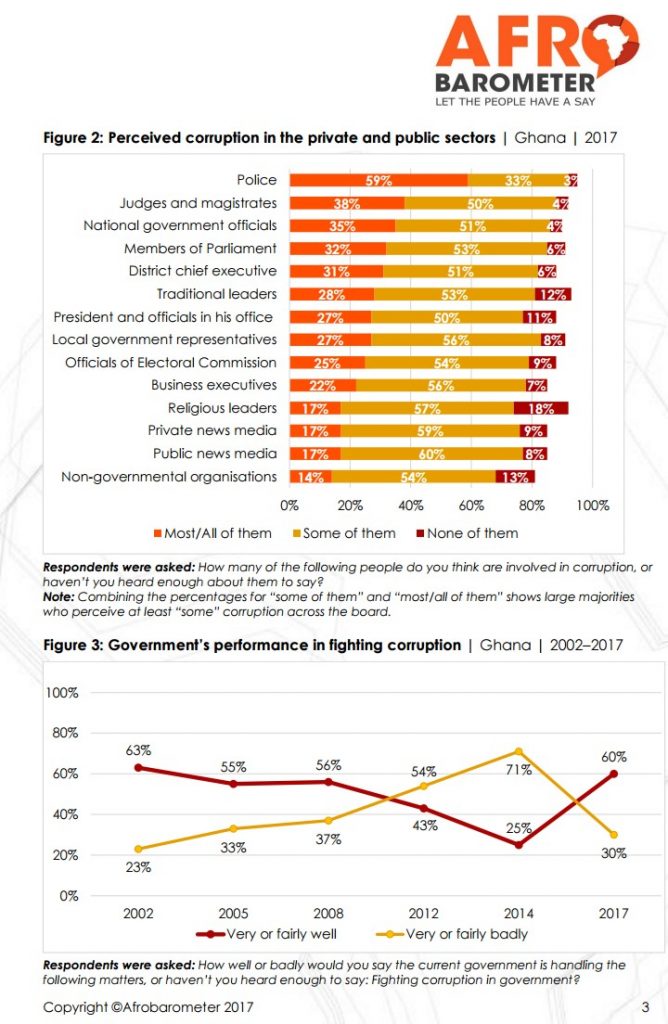 Traditional and Religious leaders were also named in the report, with 28 percent of respondents perceiving the former to be corrupt, while 17 percent perceive most or all religious leaders as corrupt.

The report also revealed that, most Ghanaians want stiffer punishments for officials who are found to have engaged in corruption.

64℅ of the respondents called on the government to name, shame and prosecute officials who have misappropriated state funds.

The survey also indicated that, Ghanaians want the government to recover funds which were pocketed by these state officials.

‘Gov’t can deal with corruption’

In the 2014 Afrobarometer report,  64 percent of respondents thought that corruption had increased.

The report also said 20 percent of Ghanaians did not believe in the capability of the political system to fight corruption.

However, in the new report, most Ghanaians have expressed increased confidence in the government’s ability to fight corruption. 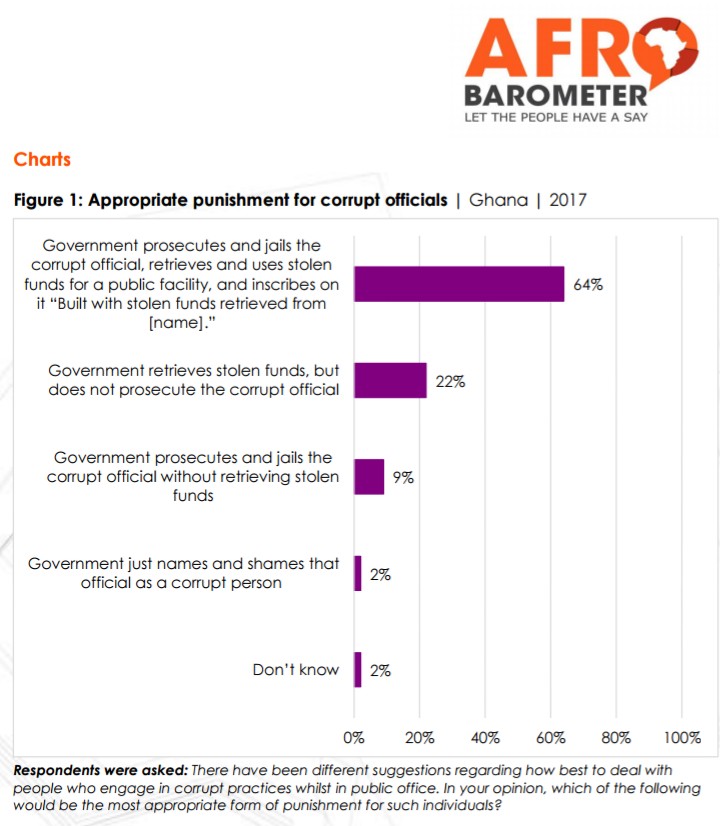 “There is a rise in public confidence in government’s efforts to combat corruption in 2017, compared to 2014. This is after over a decade of decline,” the report added.

Fight against malaria ‘stalling’ – WHO