US musician Tom Petty has died in California aged 66, says a statement issued on behalf of his family.

Petty was found unconscious, not breathing and in full cardiac arrest at his Malibu home early on Monday.

He was taken to hospital, but could not be revived and died later that evening.

Petty was best known as the lead singer of Tom Petty and The Heartbreakers, and his hits included American Girl, Breakdown, Free Fallin’, Learning to Fly and Refugee.

A statement on the singer’s Twitter page described Petty’s passing as an “untimely death”. 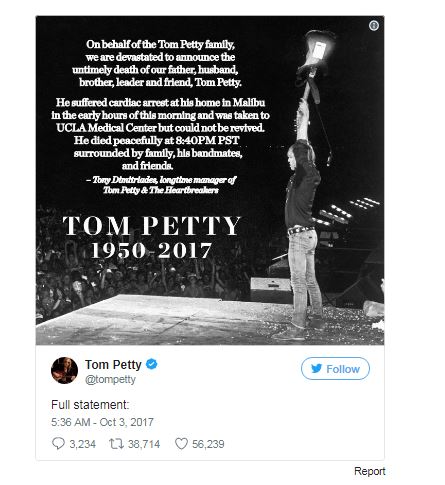 Petty was also a co-founder of the Traveling Wilburys group in the late 1980s, touring with Bob Dylan, Roy Orbison, Jeff Lynne and George Harrison.

“I thought the world of Tom. He was a great performer, full of the light, a friend, and I’ll never forget him.”

McCartney tweeted that he was “sending his love” to Petty and his family, while King said her “heart goes out” to “family, friends and fans of Tom Petty, of which I’m one”.

Beach Boys star Brian Wilson tweeted that he was “heartbroken” to hear of the news.

He tweeted: “Today America lost one of its musical giants. Thank you Tom Petty for all the music. To me you will live forever.”

Petty also found solo success in 1989 with his album Full Moon Fever, which featured one of his most popular songs, Free Fallin’, co-written with Jeff Lynne.

In 2002, Petty was inducted into the Rock and Roll Hall of Fame.

He endured a rough childhood, living in poverty with an alcoholic, abusive father – but his life changed in 1961 when he met Elvis Presley and shook his hand.

“That was the end of doing anything other than music with my life,” he said.

He joined two bands at school, The Sundowners and The Epics, before dropping out to play with Mudcrutch, aged 17.

After that band broke up, Petty and several of its members formed Tom Petty and the Heartbreakers, releasing their debut album in 1976. 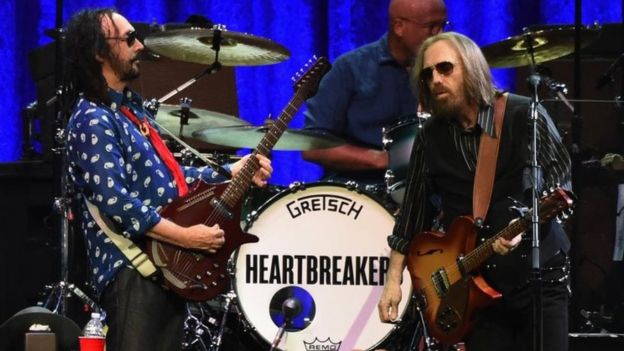 Their career was slow to take off, but heavy touring – including a well-received support slot with future E Street Band member Nils Lofgren in the UK – eventually pushed them into the chart.

Over the next four decades, they became one of rock’s most reliable live acts, doggedly sticking to their no-frills rock template, and producing a stream of radio staples including Don’t Come Around Here No More and the Stevie Nicks duet Stop Draggin’ My Heart Around.

Petty scored solo hits with the platinum-selling albums Full Moon Fever and Wildflowers, while the 1991 album Into The Great Wide Open gave the band a number one single, Learning To Fly.

The video for the title track was also in constant rotation on MTV, thanks in no small part to cameos by Johnny Depp, Faye Dunaway and a then-unknown Matt LeBlanc.

Petty gave his last live shows just a week ago, playing three sold-out dates at the Hollywood Bowl as part of a 40th anniversary tour.

Last December, he told Rolling Stone magazine: “I’d be lying if I didn’t say I was thinking this might be the last big one. We’re all on the backside of our 60s.

“I have a granddaughter now I’d like to see as much as I can. I don’t want to spend my life on the road.”

Couple conned Amazon out of $1.2 million worth of tech goods

Be considerate in your demands – Akufo-Addo tells Ghanaians