More support is building up for the suspended General Secretary of the New Patriotic Party (NPP), Kwabena Agyepong, as some party activists have joined the appeal for his immediate reinstatement.

Beyond the appeal for his reinstatement, the group expressed concerns that there was a veiled attempt to expel Kwabena Agyapong from the party

[contextly_sidebar id=”28AFeSYLaJhpWipuPLhGgukViontr2ek”]Addressing the press, convener of the group, Jihan Efua Nuhu, said the NPP should be forthright and abide by the party’s constitution if there were any attempts to expel Mr. Agyapong.

“Everybody is wondering if indeed, it is a removal rather than a suspension,” she noted.

Between the lines of the statement announcing the suspension of Mr. Agyapong, the group contended that, there “was a carefully orchestrated ground machinery that propagated spurious allegations and very slanderous falsehood without providing a shred of evidence… all calculated to tarnish the image of our elected General Secretary and facilitate casting aside the popular choice of the delegates.”

The NPP suspended its 2nd Vice Chairman, Sammy Crabbe, alongside Mr. Agyapong in 2015, after they were accused of publicly rebelling against the party’s decision to indefinitely suspend its National Chairman, Paul Afoko.

Mr. Afoko and Mr. Crabbe, subsequently filed a suit over their suspension, but both suits were thrown out by the court.

Unlike the two, Mr. Agyapong did not seek legal action, which some have cited as proof of his loyalty to the party and an argument in favour of his reinstatement.

Some constituency and polling station executives of the NPP in the Brong Ahafo Region, have already petitioned the party’s hierarchy for the reinstatement of Mr. Agyapong.

The petitioners argued that, his conduct towards the party, even after his indefinite suspension in 2015, was evidence of his unwavering loyalty. 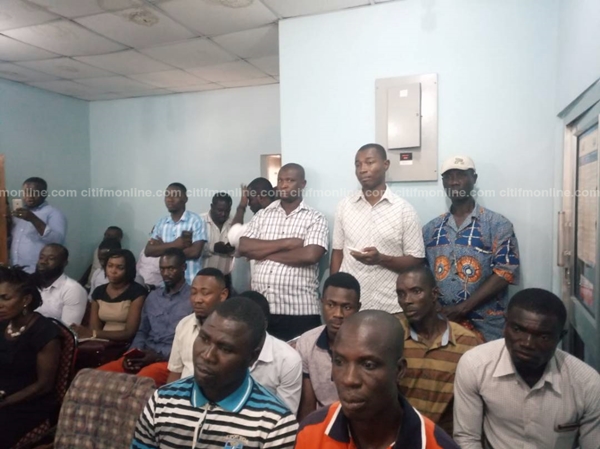 The group reminded the NPP of its democratic credentials, and urged that it abides by the party’s constitution.

“If there is an intention to remove him, as it seems to us now, then the processes stipulated in the appropriate article of the party’s constitution, Article 10, should have been respected… Only an emergency delegates congress can attempt to remove an elected officer,” Mrs. Nuhu said.

The group concluded with an appeal to the National Council of the NPP “to kindly lift the suspension and restore the General Secretary, Kwabena Agyei Agyapong, to his elected position. We are hopeful that in the spirit of fairness, our petition will meet a favourable response.”

A) Violation of Article 3(D) of the NPP constitution which enjoins members to publicly uphold the decisions of the party, through various acts including;

i. His disregard for NEC decision on 23rd October, 2015, suspending Mr. Paul Afoko.

ii. Various Public statements he made that cast the Party in bad light.

B) He engaged in unilateral actions and activities without consultation of, or authorization by the NEC, such as;

i. Writing to the Electoral Commission designating only himself and suspended Chairman Afoko as the only authorized signatories.

iii. Non-reference of legal matters to the proper legal Committee of the Party

v. Misrepresentation/misleading of NEC on status of some constituency primaries

vi. He, in conjunction with suspended Chairman Afoko and Sammy Crabbe, launched Party cards without authorizations from NEC.