The quality and equity aspect of the Free Senior High School policy that was rolled out amid fanfare is being called into question, even in the nation’s capital, Accra, with the dire infrastructure situation students of the La Presbyterian SHS are enduring on a daily basis.

The school had already made headlines when its headteacher, who was subsequently interdicted by the Ghana Education Service, said first-year students had to pay GHc 80 for desks or risk standing during classes.

The students may not be standing for classes, but a Citi News reporter managed to gain access to the classrooms in the school, and the sight that greeted him resembled conditions one would associate with primary schools-under-trees in some of the most deprived areas of the country.

Some of the students were sitting on makeshift chairs comprising wooden planks supported by cement blocks. The lucky ones had tables, as others were seen with their books on their thighs and bags on the dusty floor. 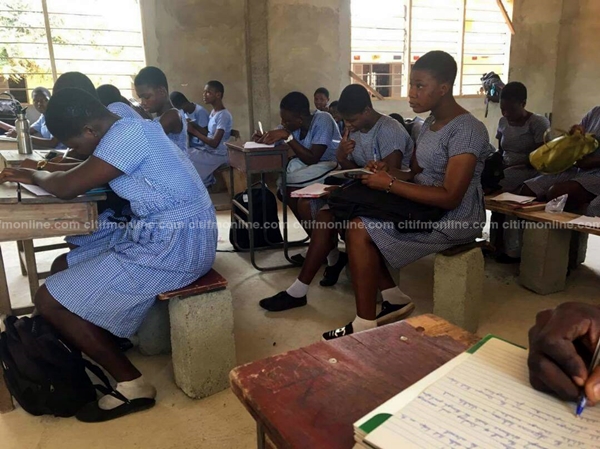 The students in the school are already contending with studying in uncompleted buildings without marker boards.

The United Nations, in its assessment of the progress of Goal 4 of the Sustainable Development Goals, dealing with achieving inclusive and equitable quality education for all, noted that equity issues constituted a major challenge in education, and that in all countries with data, children from the richest 20 percent of households achieved greater proficiency in reading at the end of their primary and lower secondary education, than children from the poorest 20 percent of households.

The lack of trained teachers and the poor condition of schools in many parts of the world are jeopardizing prospects for quality education for all, the UN also noted.

The La PRESEC school’s headmaster, Samuel Salamat, was accused of sabotaging the Free SHS policy, and the news of his interdiction was welcomed by some sections of the public.

But his decision to request additional fees was defended by some, with the incoming President of the National Association of Graduate Teachers (NAGRAT), Angel Carbonu, calling the GES’s sanctioning of some headteachers for allegedly charging illegal fees inconsiderate.

Mr. Carbonu noted that, the infrastructure constraints in those schools may have forced the sanctioned teachers to make these charges, ultimately in the interest of their students.

In September, aside from Mr. Salaamat, two head teachers were demoted and seven others were interdicted after they were invited for questioning by the GES to respond to allegations that they were requesting fees already absorbed by the government under its free SHS policy.

Mr. Salamat, in an earlier interview with Citi News, clarified that the supposed GHc 80 levy was voluntary.

“We have only appealed to parents that we have challenges with furniture so if they can help us repair our furniture so that we can start classes as early as possible. They cannot bring furniture from the house. We are telling them to make voluntary contributions so that we can use that to repair the furniture. It is voluntary, any amount that you can get… It is not a fixed amount. We only gave them the information that last year, parents paid GHc 80 to guide them.”

“If the person is unable to pay, we will still admit them… [But] if the chairs are not there, what can we do? A lot of my furniture is broken down. I have not taken stock to find out the furniture that is available. A lot of my tables and chairs are broken down and I can foresee that we will need more,” he said.

Find below a full report from La PRESEC classrooms: