According to Mr. Adom Otchere, Manasseh Azure’s approach in making public his findings from an investigative work on contracts between Jospong Group and the government was in bad taste and do not conform to standard practices in journalism.

He said Manasseh was unfairly setting up the owner of Jospong Group, Joseph Siaw Agyepong for public attacks.

In a 41-minute long live TV session on his show Tuesday night, Paul Adom-Otchere said Manasseh’s actions were counterproductive, and warned that it was a dangerous path for him as a journalist.

Manasseh Azure Awuni last week published series of reports he said were evidence of corruption against the Jospong Group in which the company allegedly bloated its 1,000,000 waste bin supply contract with the previous government by some $31 million.

The aftermath of the publication has been criticisms from some individuals and the President of the Ghana Journalists Association (GJA), Affail Monney, who in a statement cautioned practitioners against “using the media to wage a smear campaign against individuals, especially local businesses and personalities who have made substantial contribution to the growth of the economy.”

Many said the GJA’s statement undermined the work and efforts of investigative journalists in the country who unearth deep-seated corruption issues. 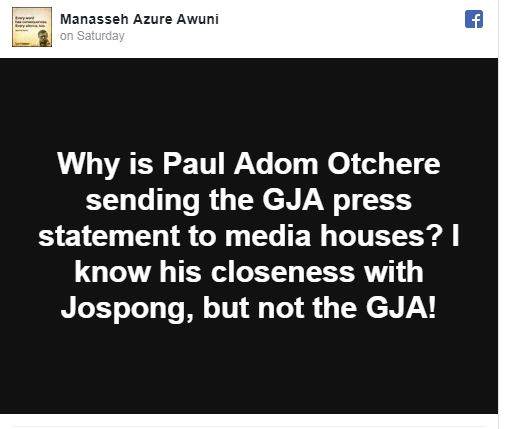 Mr. Adom-Otchere in countering the claims by Manasseh on his show, advised him to revise his notes and also take a cue from Plato and Aristotle to avoid exposing his ‘cerebral weakness’ in his reportage.

Dubbed, the “Editorial in defence of the GJA Press Statement on corruption” he criticized civil society groups who challenged the GJA’s statement saying he was “disappointed” in their posture in the matter.

According to Paul Adom Otchere, the Chairman of the Jospong Group of Companies, Joseph Siaw Agyepong, was an asset to Ghana and must be supported.

Laying a rather unusual attack on Manasseh, he described him as “Opana”, urging him to learn from Ghanaians practicing proper journalism.

The incident has attracted a lot of comments from Facebook and Twitter, with many condemning Paul Adom-Otchere for his response to Manasseh’s post, and the approach he used in getting his message across.

Watch the video below: