South Africa President, Jacob Zuma has survived a no-confidence vote in parliament after most legislators of the governing African National Congress (ANC) rallied behind him.

177 MPs voted to oust President Zuma, with 198 voting to keep him in power. Nine MPs absented themselves from the vote.

This news was greeted with cheers and singing by ANC MPs. The opposition had hoped ANC MPs might vote against their leader if the ballot was secret.

In order for the no-confidence motion to pass, at least 50 out of the ANC’s 249 MPs would have had to vote against the president.

However, the result does mean at least 26 ANC MPs rebelled, while another nine MPs abstained from voting.

Reports indicate that 40 ANC MPs turned against President Zuma in the vote.

Earlier, opposition MP Andries Tlouamma, deputy president of the Agang party, warned that if Mr Zuma survived then South Africa was “on a highway to hell”. 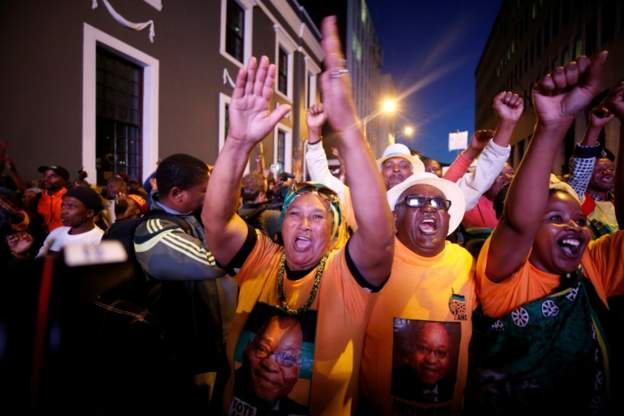 South Africa’s police minister Fikile Mbalula denounced members of the governing ANC who voted for President Zuma’s removal as “suicide bombers”. “Why do you want to compromise the revolution?” he said.

Mr Mbalula was addressing ANC supporters at a rally outside parliament after the vote.

By: citifmonline.com/Ghana with files from the BBC