The chief suspect in last Thursday’s Barcelona attack made his escape on foot to the outskirts of the city where he hijacked a car, Spanish police say.

At a news briefing, they confirmed that Younes Abouyaaqoub, 22, was suspected of driving the van which ploughed into dozens of people, killing 13.

CCTV footage in Spanish media appears to show him walking through a market district shortly after the attack.

A manhunt has been extended across Europe and police say he may be armed.

Some 90 minutes after mowing down dozens of people on the central Las Ramblas avenue, Abouyaaqoub fled to the city’s university district, police say.

Abouyaaqoub is alleged to have hijacked the car before driving it through a police checkpoint and later abandoning the vehicle. Police say he may have crossed into France.

The male driver of the car, Pau Pérez, 34, from Vila Franca, was found stabbed to death in the passenger seat, becoming the 15th victim of the Barcelona bloodshed and a later attack in the resort of Cambrils.

A woman died in Cambrils when a car was driven into pedestrians and five suspected jihadists were killed at the scene by police.

At a news conference on Monday, officials also revealed there were “strong indications” that an imam suspected of radicalising the young men who carried out the attacks had died in an explosion at a house that was being used as a bomb factory.

Police also released more images of Abouyaaqoub, and appealed for help in finding him.

Catalan officials said on Monday that all 15 victims had now been identified and their families notified. 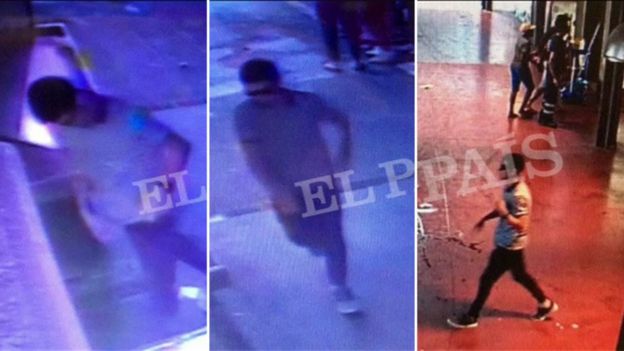 On Sunday, Catalan police chief Josep Lluís Trapero said that of 12 suspects, only one – assumed to be Abouyaaqoub – remained at large.

In addition to the five killed in Cambrils, he said four others were under arrest and there were two sets of human remains to be identified at the house that blew up in the town of Alcanar, south of Barcelona, last Wednesday night.

On Monday, police said they believed Imam Abdelbaki Es Satty was one of those who died in the house explosion at Alcanar.

Family members of the dead suspects said they believed Es Satty had radicalised several young people in their home town of Ripoll, north of Barcelona.

Spanish media outlets say Es Satty had spent some time in prison, and had met prisoners involved or linked with the 2004 Madrid train bombings in which 191 people died.

He had also stayed in Belgium for some three months last year, where he had been searching for work, including in Vilvoorde, a small town of just 42,000 from which more than 20 jihadists departed for Syria in 2014.

An official who works on de-radicalisation in Belgium has told the BBC that Es Satty tried to secure a post at a mosque near Brussels but the elders decided he should not be allowed to preach due to his “radicalised and polarising” approach.

The mosque asked police to perform a background security check but this did not throw up any specific areas of concern.

El Mundo said that one of those killed in Cambrils, Said Aallaa, had left a note in his room apologising for the harm he was about to cause.

French media also report that the vehicle used in Cambrils had been caught on speed cameras in France’s Essonne region the previous week. But a direct link between the group of attackers in Spain and the car’s appearance in France has not yet been established.

So-called Islamic State (IS) said it had carried out the Las Ramblas and Cambrils attacks, though it is not clear whether any of the attackers were directly connected to the group or simply inspired by it.

Egypt: Couple commit suicide to explore ‘what happens after death’