Have you driven on the motorway recently? How was the experience? For those of us who use that stretch almost every day, we can only thank our stars that we make it safely to our destinations. The fast deteriorated motorway has become a death trap, a disaster awaiting its turn after those avoidable May 9, June 3 etc were allowed to slip through.

The evidence of the actions and inactions of the authorities is the poor maintenance practices that endanger the lives of not only motorists but other users; the people who cross the country’s only expressway as their ‘community street’.

What makes it scarier is the absence of street lights to enable visibility on the stretch at night-making driving not only a survival of the fittest but dangerous as well.

The number of times one encounters pedestrians on the motorway will amaze you! They ran across at odd times, putting both their lives and that of motorists at risk.

A couple of weeks ago, my husband and I nearly lost our lives on the Klagon side of the motorway due to the recklessness of a  pedestrian crossing on the expressway. Had it not been God, I would not be alive to share this.

I am sure there have been several others who have had near misses as people throw caution to the wind and just ran across the road originally commissioned as an expressway.  Others too walk on the road as if they are in the bedrooms – you try to honk at them and they only stand in the middle of the road, ‘size you up’ amidst tantrums, insults and curses thrown at you, as if the motorway is a community street.

Such indiscipline has significantly increased the rate of bloodshed on the route commissioned over 50 years ago to facilitate transport between the port city, Tema and the political and commercial capital Accra. Not a day goes by without an accident on the motorway.

Currently, there are over ten points on the motorway where commercial and private vehicle drivers stop to load and offload passengers and goods. This situation should not exist.  From the Accra mall area through to the flower pot area past the toll booth, drivers stop and load with impunity without recourse to other road users.

Other notable parking areas include the stretch adjoining the Action Chapel, Printex factory, and the Ashaiman underpass among others.  Due to the lack of street lights, most of the passengers who defy orders to board vehicles on the motorway other than approved stations also get robbed while waiting for vehicles. Some are even raped, depending on the specific location on the stretch. 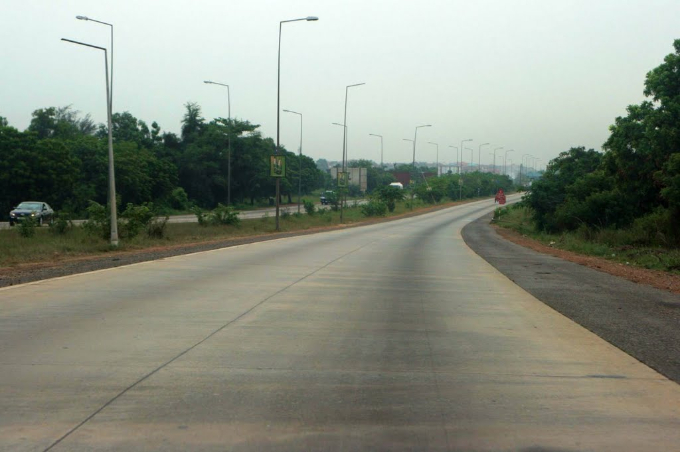 It should be noted that some accidents have occurred at some of these drop-off points because drivers mostly prompted by passengers, suddenly swerve to the outer lane to stop, only to cross an approaching vehicle.

The culprits, mostly trotro drivers and pedestrians alike, misjudge the speed of approaching traffic on the outer lanes. So before a driver who has pulled over to pick up a passenger realises, an accident would have happened. And there has been countless number of such incidents.

The police are there mostly to ensure law and order but it seems some of the officers are yet to come to terms with what leadership by example means.  Some make U-turns on the motorway; there is no such approved places on the motorway but they do it anywhere and yet turn around to arrest other road users who try same.

The men and women who are supposed to be of utmost discipline and integrity drive on the shoulders when there is traffic congestion and sometimes even drive opposite to on-coming traffic even when they are not on any emergency operational duties. 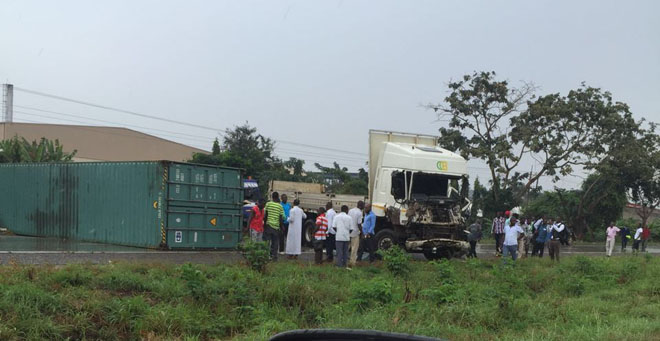 One policeman stopped a friend and I on the motorway around the Trasacco Estate area and demanded why we nearly run him over knowing he was crossing the motorway! We drove away leaving him to realise how louse he had been. And I am sure you may have your own experience with the police.

Driving along the motorway is also an expedition to witness encroachment activities in the full glare of authorities. The residential buildings, warehouses, churches, bus stations and even residential squatters leave much to be desired. Even more serious is the sprawling shanty towns on the Spintex Road side of the expressway; it leaves anyone with the difficulty of describing the country’s once priced asset as a motorway worth its sort.

Due to these developments, pedestrian crossing has increased significantly in the last few months.

The motorway is fast losing its environmental attraction and the excellent driving experience. The once breathtaking scenery, coupled with fresh air that used to make driving a delight on that stretch, have been replaced with dusty and illegal side routes and industrial establishments and residential properties.

Another phenomenon that beats my imagination is the burning of shrubs and grass in the median of the road during the dry season by the city authorities.

This emits thick bellowing smoke that clouds visibility and pose great danger to motorists, life and property.  This lazy, uncouth and outdated approach to keeping the median tidy must stop if we want to prevent further calamities on the road.

As a result of rapid urbanisation along the Spintex road, motorists that previously used the Spintex road to and from Accra have diverted their courses onto the motorway, resulting in more traffic on the stretch, especially during a downpour.

The motorway is an integral part of our economy. It is estimated that about 70,000 vehicles use the motorway daily. The 19-kilometre road commissioned in November 1965 by the Kwame Nkrumah administration forms part of the National Route 1(N1), which starts from Aflao (in the Volta Region) and ends in Elubo (in the Western Region).

It is also part of the Trans West African Highway (Abidjan-Lagos Corridor) and also links the capital city, Accra, the Kotoka International Airport and the Tema Port.

In 2004, the government of Ghana signed a contract with Meridian Port Services Limited (MPS) to run the Tema Port on a 20-year concession agreement. MPS is a joint venture between Ghana Ports and Harbours Authority and Meridian Port Holdings Limited, which is in turn a joint venture with Bolloré Group and APM Terminals – a subsidiary of Maersk.

In line with this the motorway is undergoing some expansion from the Tema roundabout and the Spintex side. It is expected that the expansion will ease traffic and make driving easier than it is now.

However, it should be noted that until the squatters are evicted, encroachment checked and a strict adherence of traffic rules and regulations are enforced to prevent careless crossing (police inclusive) of the motorway, the expansion will not serve much purpose.

The earlier these are checked, the better. I believe it will be prudent to tackle the problem now alongside the ongoing expansion works to avoid a preventable tragedy.