The US student held in captivity for more than 15 months in North Korea has died a week after returning home.

Otto Warmbier, 22, was serving 15 years hard labour, accused of attempting to steal a propaganda sign from a hotel.

He was returned to the US last Tuesday, with North Korea saying it was on humanitarian grounds.

North Korea said he had been in a coma for a year after contracting botulism but his family say he was subjected to “awful torturous mistreatment”.

A team of US doctors have also disputed North Korea’s version of events.

Mr Warmbier had suffered severe brain damage, and was medically evacuated from North Korea on 13 June to a hospital in his home city of Cincinnati, Ohio. It is unclear how he fell ill.

A statement from the family on Monday said: “It is our sad duty to report that our son, Otto Warmbier, has completed his journey home. Surrounded by his loving family, Otto died today at 2:20pm.”

They said the student had been “unable to speak, unable to see and unable to react to verbal commands”. 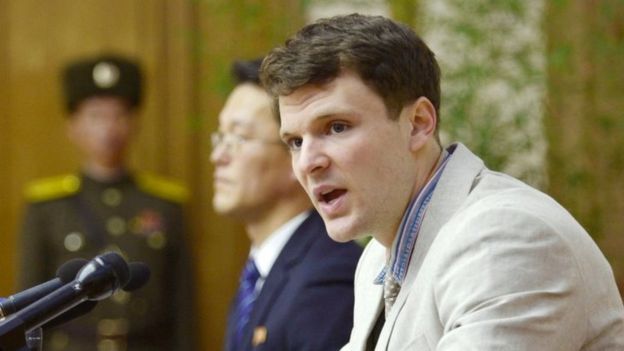 “The awful torturous mistreatment our son received at the hands of the North Koreans ensured that no other outcome was possible beyond the sad one we experienced today.”

The economics student from the University of Virginia had travelled to North Korea as a tourist.

A month after his arrest, he appeared at a news conference tearfully confessing to trying to take a sign from his hotel as a “trophy” for a US church.

“The aim of my task was to harm the motivation and work ethic of the Korean people,” he said.

Foreign detainees in North Korea have previously recanted confessions, saying they were made under pressure.

The company Mr Warmbier travelled with, China-based company Young Pioneer Tours, has announced it will no longer take visitors from the US to the country.

“The way his detention was handled was appalling and a tragedy like this must never be repeated,” it said in a statement.

“Despite constant requests, we were denied any opportunity to meet him or anyone in contact with him in Pyongyang, only receiving assurances that he was fine.”

Shortly before he was freed, his parents told the Washington Post newspaper they had been informed by the North Korean authorities that their son had contracted botulism, a rare illness that causes paralysis, soon after his trial.

He was given a sleeping pill and had been in a coma ever since, the newspaper said.

But a team of doctors assessing him in Cincinnati said they had found “no sign of botulism”.

Doctors confirmed that there was no sign he had been physically abused during his detention, based on scans.

They believe respiratory arrest led to his condition, which is caused by a lack of oxygen and blood in the brain.

President Donald Trump said Mr Warmbier’s death had deepened his administration’s resolve “to prevent such tragedies from befalling innocent people at the hands of regimes that do not respect the rule of law or basic human decency”.

“The United States once again condemns the brutality of the North Korean regime as we mourn its latest victim,” the presidential statement added.