Following the naming of Togolese President, Faure Gnassingbe as the new chairperson of the Economic Community of West African States (ECOWAS), social media was awash with insinuations that Ghana’s President, Nana Akufo-Addo lost a vote to the Togolese president.

It is unclear where the rumours emanated from, but a number of persons, notably consisting of National Democratic Congress (NDC) sympathizers run with it.

But little did they know there were a couple of fundamental flaws in the election loss claims meant to mock the President on the back of his historic 2016 election victory on the ticket of the New Patriotic Party (NPP).

For one, as pointed out by the Foreign Affairs Minister, Shirley Ayorkor Botchwey, ECOWAS doesn’t vote on the selection of a chairperson, because the position is rotational.

“Just to set the records straight. I don’t know who put this out about an Ecowas vote today at the summit. At the level of the heads of state, they mostly don’t vote on issues; as much as possible they go by consensus. There was no vote today. It had already been agreed as per Ecowas rules of rotation that the chair of authority will be a francophone country and this time Togo. So sorry to disappoint some folks, Ecowas doesn’t work like that. The chairmanship smoothly moved from Liberia to Togo. This propaganda will not wash. Guess what? It was President Akufo-Addo who proposed President Faure and all the others (peers)  clapped unanimously in agreement. Shame on those who started spreading this falsehood.  I’m off to bed.”

Faure Gnassingbe took over the rotational role from Liberian President Ellen Johnson Sirleaf at the 51st ECOWAS Summit of Heads of State held for the first time in Liberia on Sunday, June 4, 2017.

Another key flaw in the claims on social media was that Nana Addo lost in an election with 16 voters, when ECOWAS actually consists of 15 countries after Mauritania formally withdrew in December 2000. 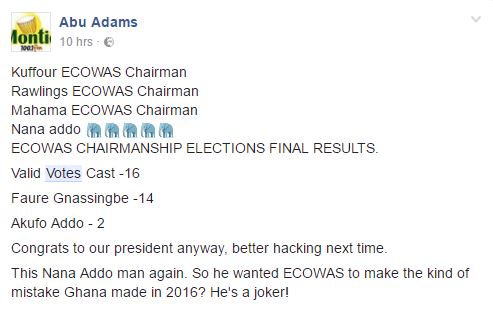 Some watchers on social Media were keen to point out the apparent ignorance in the sub-regional politics, including outspoken musician A-Plus. 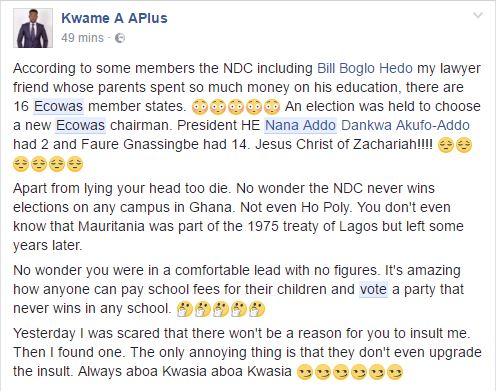 As always on social media, some Ghanaians took advantage of the situation to make jokes about the whole issue.