Ports all over the world assess their performance using set key indicators, and Ghanaian ports are not an exception to this practice.  In fact, Ghana adopted the Uniform Systems of Port Statistics and Performance Indicators (USPSPI)[1] pioneered by UNCTAD[2] in the 1980s to access and track operational efficiency. They use a set of indicators to assess their efficiency and to inform decisions on how to improve their performance and be more competitive. Some regional blocs such as the ASEAN Ports Association actually assess their performance as a bloc to enable easy comparison in order to drive competition. Though West and Central African ports (PMAWCA[3]) have been trying to do same for the past five years, they have unfortunately made little progress.

In this piece, the operational efficiency of Ghana’s biggest seaport, the Tema port (controlling about 80 per cent[4] of imports and exports), will be assessed under four key operational indicators: 1) ship turnaround time, 2) the time spent at anchorage, 3) berth productivity and 4) cargo dwell time. Using these indicators, the performance of Tema port will be compared to its promising peers on the continent; the port of Mombasa in Kenya and ports in Durban, Port Elizabeth, Cape Town and Ngqura all in South Africa[5].

Ship turnaround time (STT) measures the time from a ship’s entry into a port to when it leaves the port area. Simply put, it is the time it takes a ship to ‘pack’ at the port, offload its cargo, pick up new cargo, and leave the port. With maritime trade characterized by an unrelenting pursuit of lower costs – from containerization to vessel-sharing-arrangements of shipping lines and the building of ever bigger vessels – to compete effectively in the global supply chains, ports must reduce transport times. STT is a good indicator as it reflects the quality of service at a port. It is also an indicator of a port’s competitiveness as shipping lines lose money for every extra minute spent at the port. The line chart below charts the Ship turnaround time for Ghana (Tema), Kenya (Mombasa) and South Africa.

FIGURE 1: A Comparison of Ship Turnaround Time for Ghana, Kenya and South Africa 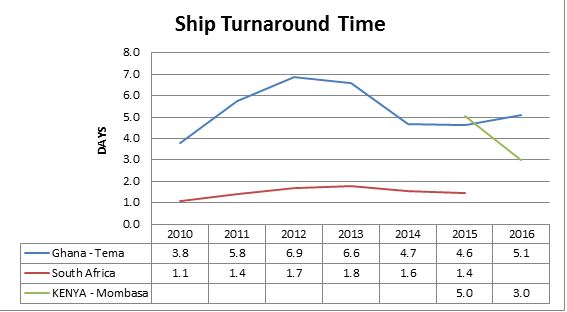 Source: Ghana Ports and Harbours Authority, the Northern Corridor Observatory and others[6].

As can be seen clearly from the chart above, while South African ports were averaging STT of 1.5 days, putting it at par with some of the world’s best (both Singapore and Rotterdam ports have STT of between 1 and 2 days)[7], Ghana’s Tema port reduced their ship turnaround time in 2014 to 4.7 days but mostly remained high over period 2010-2016. Previously, ships will take almost a week to offload its cargo, pick up new ones and leave the Tema port for other destinations. Of more concern is the fact that between 2010 and 2016 the STT has actually worsened, suggesting that the Tema port became less competitive over the years. On the other hand, the port of Mombasa is on a quest to realize the full trade potential of the Mombasa Port Corridor, and as a result improved their STT from 5 to 3 days in a space of one year after adopting a port community charter[8] in 2014.

So, what could be accounting for the high and increasing STT at the Tema port? The STT comprises the waiting time before berth and the servicing time. The waiting time before berth which is also known as time spent at anchorage is heavily dependent on the availability of berth. As we will see in the following text, the time spent at anchorage at the Tema port is incredibly high especially when compared to other Sub Saharan African ports. The servicing time which captures the time spent offloading and reloading the ship after it has been berthed is also high and has actually increased by about 20 per cent[9]  between 2010 and 2016. So not only does a ship have to wait for hours before it can dock or ‘pack’, but once it has finally docked, it takes them an equally long time to be serviced before it can leave the Tema port.

The servicing time is critically affected by the cargo volumes, the quality of infrastructure at the port and the skills and efficiency of the gangs working on the cargo. Though cargo volumes have increased over the years, so have the skills of the gangs. Training cost per wages increased by about 88 per cent between 2010 and 2016. Tons worked per gang hour have also increased though by just 7.5 per cent.

Time spent at anchorage, also known as the ship waiting time before berth is the period from the time the ship enters the port area, until its first berth. The average waiting time has a direct effect on STT and it may indicate congestion at the port. At the Tema port, the average waiting time peaked in 2013 to 83 hours (3.5 days) and has since declined to 54 hours (2.25 days) in 2016. This simply means that vessels coming to the Tema port can wait over 2 days before it can dock or ‘pack’. As in the case of the STT, Ghana’s performance does not compare well to that of Kenya who has reduced its average waiting time from 41 hours (1.7 days) to 13 hours (less than a day) in the space of one year.

FIGURE 2: A Comparison of Time Spent at Anchorage for Ghana, Kenya and South Africa 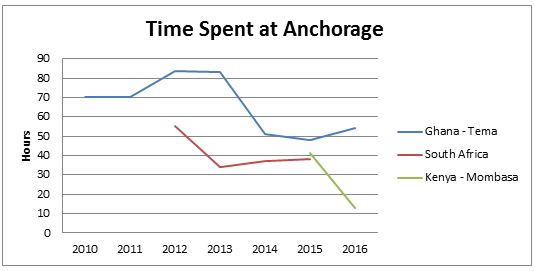 Source: Ghana Ports and Harbours Authority, the Northern Corridor Observatory and others.

As can be seen clearly from figure 2, Kenya’s performance surpassed that of South Africa that averaged 41 hours in ship waiting time. This gives less traction to the argument of limited infrastructure being a major source of delay; South African ports according to the World Bank Logistics performance index[10] have more resources than Kenyan ports. So how did Kenya achieve this impressive result? After adopting the Port Community Charter in 2014, the port of Mombasa also adopted a Fixed Berthing Window policy with the aim of reducing its average waiting time to 24 hours (a day). Figure 3 shows the dramatic decline in the waiting time, even declining below the target of 24 hours.

FIGURE 3: Time Spent at Anchorage for the Mombasa Port in Kenya

A Fixed Berthing Window simply means allotting a particular time window to a vessel for berthing. Thus, the shipping line can plan with the time allotted. The port of Tema with its 14 berths, which is quite close to Mombasa’s 19 berths uses a ‘first come, first service’ berthing plan. This implies that several vessels can come at the same time to the port and thus will have to wait for a berth to be available. In 2012, ships were waiting up to 10 days just to berth in Tanzanian [11] ports and this translated into an additional cost of 22 per cent on container imports and about 5 per cent on bulk imports. Clearly, delays and inefficiencies are costly.

Other indicators that reflect productivity at the berth have also improved considerably. Tons worked per gang hour have increased by 7.5 per cent[12] between 2012 and 2016. Though the consistency is laudable, there is still a lot of room for improvement especially given that the STT is still high. Even though data on berth productivity for Kenya’s Mombasa port could not be obtained, the decline and relatively low STT is a good indication of high berth productivity.

A World Bank report[13] in 2012 indicates a cargo dwell time of 20 days for the Tema port compared to 3.9 days in South Africa (Durban) and 7.1 days in in Kenya (Mombasa) over the same period. Cargo dwell time is simply the time cargo (containers) spends within the port. High cargo dwell times have serious time and cost implications on the inventory of businesses. Several reasons have been given as to why the incidence of dwell times in Sub Saharan Africa is high. The study in 2012 finds that the usual assumption that the private sector is interested in reducing cargo dwell time is mostly not the case in Sub-Saharan Africa.

Poor handling and operational dwell time generally account for just about 2 days out of at least 15 days of dwell time on average[14]. Most delays are due to transaction and storage time. According to the report, importers within Sub-Saharan Africa have very strong incentives to use the port as a storage area. For example, at the Douala port, it is cheaper to store your cargo in the port for up to 22 days (11 days beyond the terminals free time). A similar situation exists at the Tema port. Assuming a 30-day month, it will cost an importer GHS 780.00 to store a stuffed container within the Tema port for one month beyond the 7 days free storage time. This amount is 120 per cent lower than the $ 400 (equivalent to GHS 1720.00) charged by warehouse operators.

The activities of these importers – no matter how small – have an effect on the overall dwell time of the port. The high dwell time in turn hurts the competitiveness of the port. Custom authorities on the other hand may be less committed to reducing dwell times at the port as the cost is easily shifted to the importer and eventually the consumer in the form of demurrage. This can lead to somewhat needless port expansion.

Attaining a competitive port system seems high on the agenda of most governments in Ghana. The erstwhile Mahama administration signed a contract to expand the Tema port with the intention of making the port more competitive. Ghana’s current Vice President recently announced three (3) major policies to enhance ports’ competitiveness: mandatory joint inspection at the ports, a 100 per cent paperless system and removal of all internal custom barriers on the Ghana trade corridor. However, to achieve the goal of an efficient and a highly competitive port, especially with the pro-business stance of the current government, a lot more needs to be done. Here are a few recommendations.

IMANI is grateful to senior staff of the Ghana Ports and Harbours Authority for their cooperation in writing this report. Government should ensure our Ports are efficient and profitable.

[3]. The Port Management Association of West and Central Africa