Ghana has been named as one of the three countries in Africa to benefit from the Germany’s “Compact with Africa” Programme – a programme that will assist Ghana improve conditions for sustainable private sector investment, investment in infrastructure, economic participation, and employment in the country.

This was made known by the Minister for Finance, Ken Ofori-Atta, at a meeting with the Ghanaian community resident in Germany, on Sunday, June 11, 2017, held in honour of the President of the Republic, Nana Addo Dankwa Akufo-Addo, in Berlin.

Ken Ofori-Atta explained that the Compact with Africa Programme, initially, had Senegal, Cote d’Ivoire, Tunisia, Morocco and Rwanda, being the countries that had been signed onto the Compact.

Only three countries out of the five, he said, were to be beneficiaries of €100 million that came along with signing the Compact.

According to the Finance Minister, however, Ghana has been chosen to be one of the countries signed onto the Compact “because of what President Akufo-Addo has done. It is essentially because there is a new confidence that Ghana is coming back, and Ghana is back. We were nowhere near it (Compact with Africa Programme). But the work President Akufo-Addo has been doing resulted in the Germans saying, ‘why don’t we get Ghana involved in this?’ And, that is why we are here.”

Ken Ofori-Atta noted that this development “was a real sign of confidence for us. We thought that it was over. Then they (Germans) came back a couple of weeks later, in March 2017, and said that ‘we should put our money where our mouth is. So let us select 3 countries in Africa where we can have a bilateral relationship with, and they selected two of the countries who were already in the Compact – Tunisia and Cote d’Ivoire – and they said Ghana be part of it, i.e. the third country’”.

Her continued, “They also said here is another 100 million Euros, do something with it. So you are beginning to see the response the world is having. We are beginning to see a sense of a regeneration, the Black Star is shining again. We certainly are not a poor country, as President Akufo-Addo said. We are also not chickens, as Aggrey said, we are eagles and, as such, we should fly.”

We are fixing economy
Having inherited an economy with a budget deficit of 9%; a primary balance which was negative, which meant Ghana had to borrow to pay her debts; GH¢10 billion in interest payments each year; high rates of inflation; and GH¢7 billion of “hidden” arrears, amongst others, the Minister for Finance indicated that the Akufo-Addo government has put in place measures to fix and restore confidence into the country’s economy.

He noted that, between the cost of labour, interest payments and statutory fees, these amounted to 107% of Ghana’s revenue, “so obviously we were not going to do much.”

This, he indicated, led to the appointment of a new Commissioner of the Ghana Revenue Authority to bring dynamism in the collection of revenue; examining of government expenditure; and the capping of statutory funds to 25% of government revenue.

“That immediately freed up fiscal space for our programmes, as well as providing the stimulus package for the struggling businesses. We abolished a lot of taxes for people from Abossey Okai to the Stock Exchange, so people can feel energised and get into self-employment,” he added. 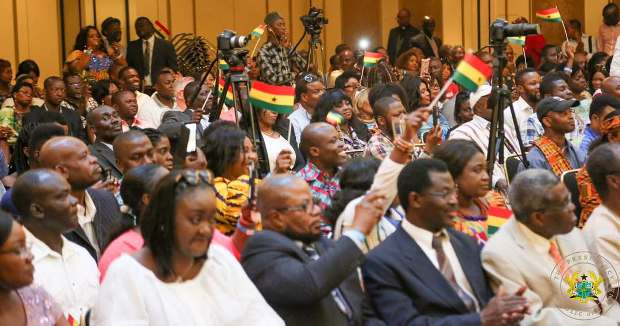 Re-profiling Debt
“What do you do when you inherit an economy with $30 billion of debt, paying GH¢10 billion every year in interest payments, and in every three months, you go into the market to get money meant for the private sector to pay interest on your debt and wages and salaries of workers?” Ken Ofori-Atta quizzed.

This situation, led to the managers of the economy deciding to re-profile Ghana’s debt, according to Ken Ofori-Atta.

“Reprofiling means that instead of these debts maturing every 90 days, let us find a way to increase the tenure of maturity so that instead of the 91 days and 5 years, we move it to 15 years. It gives us some breathing room to enable us to do what we need to do to revive the economy,” he explained.

Ken Ofori-Atta was confident of the measures put in place by the government will result in reducing the budget deficit from 9% to 6.5%; increase growth rates from 3.6%, the lowest in 22 years, to 6.3% at the end of 2017.

“The primary balance will be positive, which means we will not borrow to pay our debts. Things have stabilised, interest rates are coming down, but there is still a lot of work to be done,” he said.