The Minister of Defence, Dominic Nitiwul has ordered an immediate investigation into the cost of a new Military Cemetery at Burma Camp valued at $6 million.

According to the Minister, the cost is simply outrageous and must be probed for a possible review.

[contextly_sidebar id=”5LGIUc1jhQH7TgJgzjIRdL0uYijQEKYs”]The cemetery is being constructed as an alternative to the Osu Military Cemetery, which currently has very limited graveyard space.

Speaking to Citi News after a tour of some military installations in Accra, Dominic Nitiwul also indicated that government will review most of the Public-Private Partnerships, such as the cemetery, put in place by the previous administration.

“I am also reviewing some of the PPP [Public-Private Partnerships] projects undertaken by the previous government because clearly, there were problems with them. I am not satisfied with some of them. I have asked them to redo it, like the cemetery,” the Minister said.

“I think the cost [of the cemetary] is too much. It is $6 million. It is outrageous and I will look critically into it. I have already asked them to start an immediate investigation into it. At least we can save something to put into the accommodation for our troops.”

The Akufo-Addo Administration has expressed its commitment to improving the living conditions of soldiers nationwide, hence the release of GHc 23 million for the completion of some Social Security and National Insurance Trust (SSNIT) residential facilities for personnel of the Ghana Armed Forces. 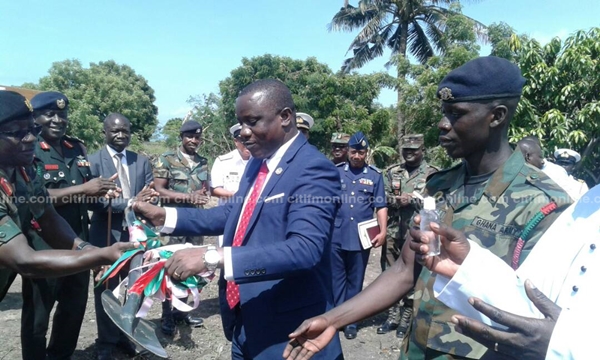 The government has assured troops that all barracks across the country would be refurbished and renovated and that more residential accommodation facilities will be provided to reduce the acute accommodation problem facing troops.

According to the Defence Minister, some 5,000 soldiers do not have quality accommodation, which is one of the biggest challenges facing the Armed Forces.

Three contracts have also been awarded for the three high-rise buildings, ahead of the broader improvement of the army barracks.