The Military High Command has concluded investigations into the alleged involvement of some soldiers in the protection of illegal mining sites in the Ashanti Region.

This followed an order for a probe last Tuesday by Defence Minister, Dominic Nitiwul in response to claims by the Lands Minister, John Peter Amewu.

[contextly_sidebar id=”pnUqlJEJ9q6KtRzbVtFf4MW2tEkp6AjD”]According to Citi News sources at the Defence Ministry, the report has been forwarded to the President who is the Commander-in-Chief of the Ghana Armed Forces.

The Minister for Defence is scheduled to address the press immediately the President is briefed on the matter and an appropriate decision taken.

The allegations came to the fore after the Lands and Natural Resources Minister, John Peter Amewu said some military officers were offering protection for some foreigners who were mining illegally.

Mr. Amewu, on a tour of some mining sites, noted that most of the sites he visited were heavily manned by the military command. But he expressed some concerns saying his outfit had under no circumstance signed any contract with the military to protect the miners. 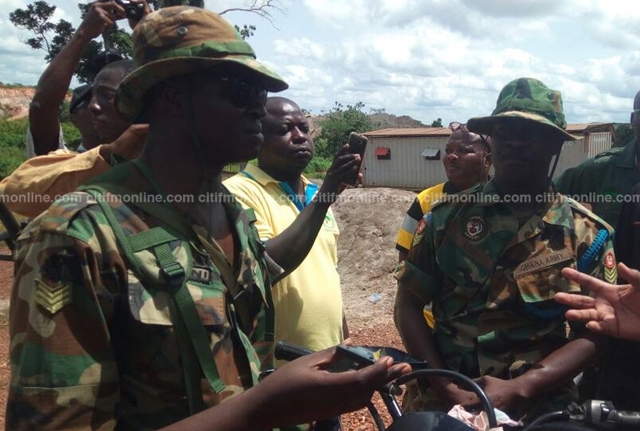 The Member of Parliament for Manso Adubia, Yaw Frimpong also alleged that the foreigners engaged in illegal mining sought permission from the former Defence Minister, Benjamin Kumbuor, for military protection, and were subsequently granted.

Mr. Nitiwul responded by saying his outfit had not cleared any military personnel to undertake such activity.

But he said the Defence Minister told Citi News that he had no cause to doubt the claims by Mr. Amewu and therefore tasked the Chief of Defence Staff, Major General Obed Akwa to immediately investigate the matter.

Mr. Nitiwul further assured that any military personnel caught engaging in the illegal act would be dealt with.