Former President, John Mahama has lauded Ghanaian workers for their dedication towards the country’s development efforts.

[contextly_sidebar id=”QIfW3kEN1rzT9ntHQOF9ahnEDnYAcBS7″]He said the workers deserve commendation for their many years of service to ensure the growth and sustenance of the country’s economy.

In a series of social media updates to commemorate May Day, John Mahama said the hard work of Ghanaian workers must not be derailed. 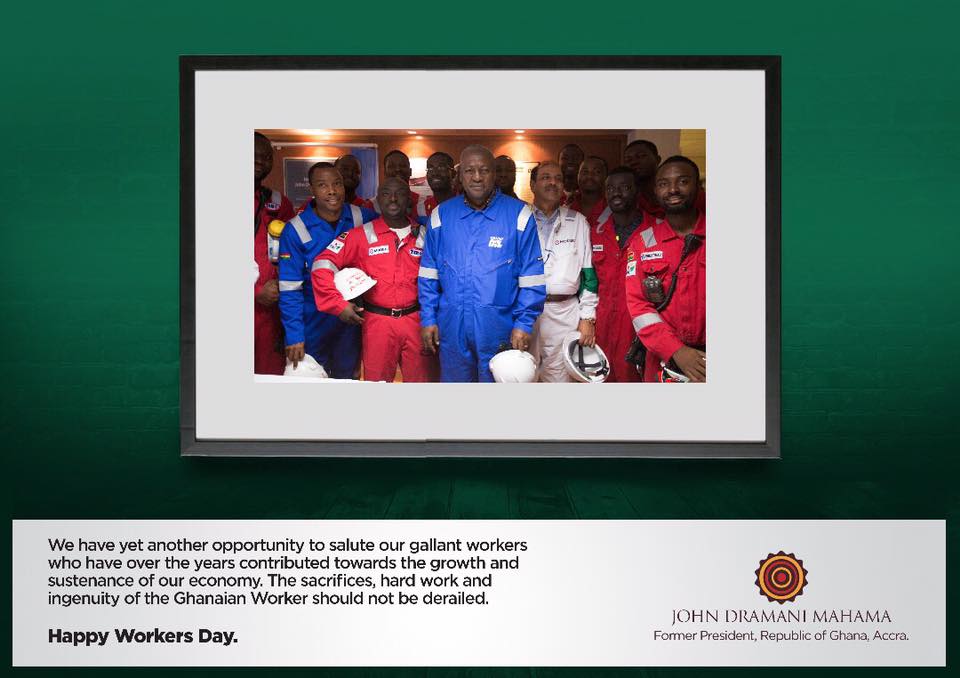 “We have yet another opportunity to salute our gallant workers who have over the years contributed towards the growth and sustenance of our economy. The sacrifices, hardwork and ingenuity of the Ghanaian Worker should not be detailed,” he said in a Facebook post.

Ghanaian workers today [May 1] are joining millions of workers across the world to mark May Day, known in some countries as Workers’ Day.

The day is set aside to recognize and celebrate the contribution of Ghanaian workers to nation building.

The national May Day celebration and parade is being held at the Independence Square in Accra under the theme, “Ghana @ 60: Mobilising Ghana’s Future through the creation of Decent Jobs.”

John Mahama under his presidency witnessed a number of labour agitations over the non-payment of salaries and poor working conditions.

Although his government undertook key projects and actions in the interest of the country’s labour force, it bore the brunt of the unions especially over their failure to swiftly act to address some of their concerns.

The NDC government for instance in October 2015 increased the minimum wage from GH¢7 to GH¢8.

Around the same time, it increased the basic salary of public sector workers by 10% under the Single Spine Pay Policy.