Ghana on a path to debt sustainability and growth – Nana Addo

The President of the Republic, Nana Addo Dankwa Akufo-Addo, has stated that the programmes and policies that have been initiated by his government, some five months into office, will put the country on a path of fiscal consolidation, debt sustainability and growth.

Addressing the 2017 World Bank’s Development Finance Forum, which is currently on-going at the Kempinski Hotel in Accra, President Akufo-Addo noted that maintaining a stable macroeconomic environment in the context of a growing economy is fundamental to attracting private sector investment into the country.

It is for this reason, he said, that his administration has established a macroeconomic framework with policies that seek to restore fiscal discipline and macroeconomic stability. 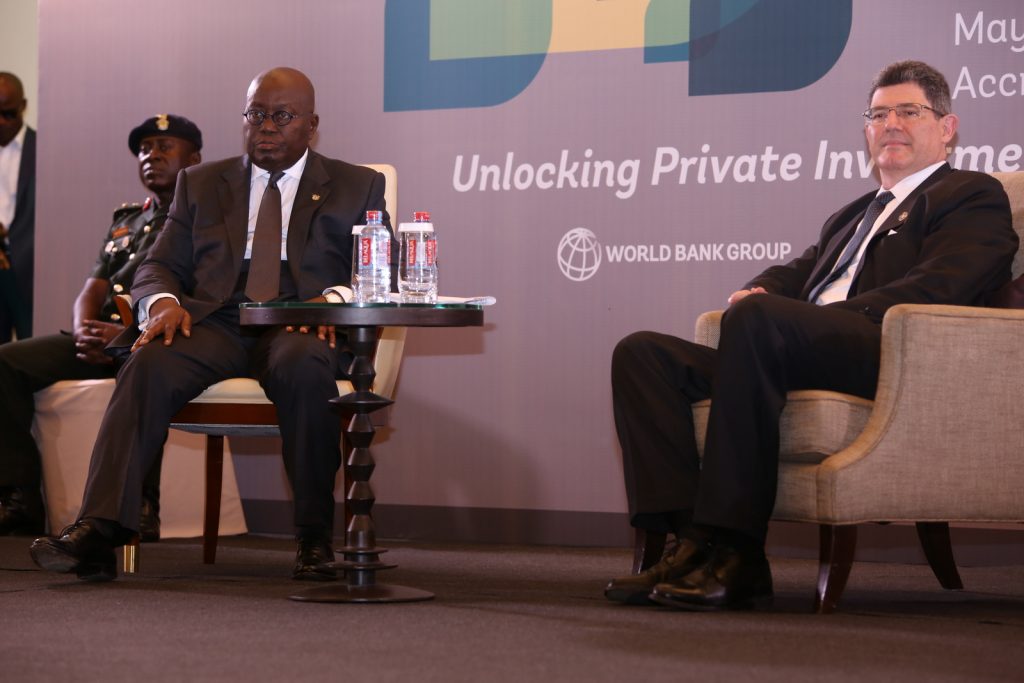 “We have put in place measures to reduce the fiscal deficit bequeathed to us from 9% in 2016 to 6.5% this year. Government has created fiscal space by capping earmarked funds to 25% of government revenue, and realigning expenditures to government priorities. This is a policy that successive governments have tried over several years to implement, but were unable to do,” he said.

To boost growth, the President stated that his government has re-oriented fiscal policy from a focus on taxation to a focus on production.

Furthermore, the President added, effective September 1 this year, clearance of goods from Ghana’s ports will be 100% paperless. Additionally, all internal customs barriers in the country will also be removed to facilitate the movement of goods.

As part of the process of formalising the economy, President Akufo-Addo reiterated the commitment of his government towards the implementation of a digital property addressing system for Ghana this year and also the issuance of biometric National Identification cards to residents this year, so that every resident will have a unique identification number.

“We have encouraged majority Ghanaian private sector participation in the Electricity Company of Ghana (ECG), the main distributor of power in Ghana, under the Millennium Challenge Compact with the U.S. Government. The Government has reviewed existing Power Purchase Agreements (PPAs). Our policy is to move Ghana from a reliance on thermal towards renewable energy. We have, thus, decided that new PPAs will only be signed for renewable energy,” he said.

On agriculture, President Akufo-Addo told the World Bank forum that “we have instituted a programme that we have dubbed ‘Planting for food and jobs’. It provides farmers access to affordable inputs, extension services and improved irrigation infrastructure. We are embarking on a private sector led industrialisation programme through a “one district, one factory initiative”, and a $100 million stimulus package for the revival of distressed companies.”

In a clear departure from “the historic resort to borrowing and more borrowing that has resulted in the ballooning of our debt stock” by the previous Mahama administration, the President indicated that his government, as a matter of policy, has decided to seek more private sector equity financing for infrastructure projects. This, he added, is a policy underpinned by his commitment to the private sector, and by the desire to maintain debt sustainability.

“We are implementing a policy of re-profiling our existing debts to extend the maturities, reduce the interest burden and create space for the private sector. About six weeks ago, Ghana issued, for the first time, a 15-Year local-currency bond, raising in that cycle more than US$2 billion. That is evidence of the returning private investor confidence in Ghana,” he said.

He continued, “Because investors make decisions on the basis of their perception of risk and uncertainty, this transaction sends a clear message to the markets that this new government, my government, has started on a sound footing and that Ghana is on a path of fiscal consolidation, debt sustainability and growth.”

Ghana, a land for private capital

President Akufo-Addo, in view of these, declared to the gathering that Ghana is a land of opportunity for private capital.

More importantly, President Akufo-Addo stated that Ghana is “Open for Business and has taken it upon herself to build a business-friendly economy that will enable her get to the stage where the opportunities available here will help her build an optimistic, self-confident and prosperous nation. Beyond Aid.”