Military personnel found protecting an illegal mining site in the Ashanti Region, were deployed there in 2014, upon the request of a former Deputy Regional Minister, Joseph Yamin.

The Ashanti Regional Minister, Simon Osei-Mensah, revealed this to Citi News after being briefed during a Regional Security Council meeting on the issue.

[contextly_sidebar id=”tOJegdIUNlLTGz3BeDSHYsiyHWmArCJV”]The soldiers were deployed to the area about three years ago after the Geo Professional Services Company, complained about attacks from illegal miners at Tontokrom, in the Amansie West District.

“So we had a Regional Security Council meeting to be briefed by the 4BN [4 Infantry Battalion] commander. The information that he gave was that, these people were sent there officially and it is not that one team has been there all the time. They change them over a period and he showed communication between Accra and the 4BN,” the minister explained.

“The briefing also indicated that, there was a point somewhere in 2014 or 2015, where the company, GPS, reported to the military in the region that they had been attacked on two occasions and for that matter, they wanted military protection.”

“The report went on to indicate that, the Deputy Minister of the region [Joseph Yamin], who was heading a task-force that was operating in galamsey areas, made a request to the high command of the 4BN, who upon that request informed the hierarchy in Accra. It was on that basis these people were sent there.”

When the issue of soldiers involved in illegal mining came to the fore, the Defence Minister, Dominic Nitiwul, ordered a probe into the military involvement in the protection of illegal mining sites, after claims by the Lands and Natural Resources Minister, John Peter Amewu, who was inspecting mining sites in the region earlier in May 2017.

The claims came as Mr. Amewu ordered the arrest of four foreign nationals of Geo Professional Services Company for flouting the mining laws of the country. 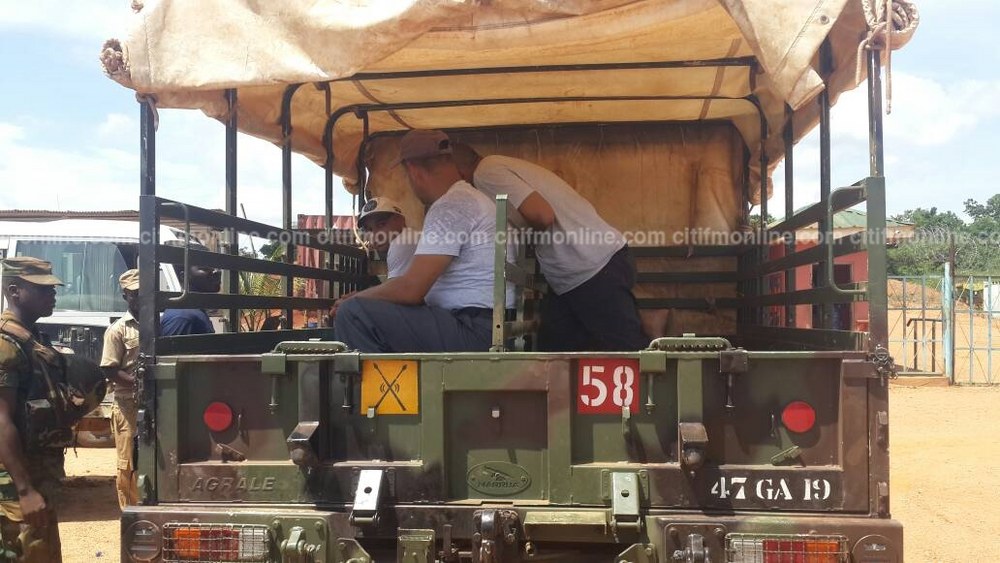 After the arrest, the Member of Parliament for Manso Adubia, Yaw Frimpong, told Citi News that the foreigners applied for protection under the former Minister of Defence, Ben Kumbour.

Since then, military personnel have been recalled from all mining sites, according to the Ashanti Regional Minister.

Mr. Osei-Mensah however reminded that, the soldiers served a purpose, especially for large-scale mining sites, thus, he said he will write to the Military High Command to request for their re-deployment.

The Minister recalled the death of the Head of Communications for Anglogold Ashanti (AGA), who was killed in February 2016, after he was run over by a company car in an attempt to escape from some illegal miners who attacked him and his colleagues.

The intrusion of illegal miners on the concessions of large-scale mining companies has been a major problem for the mining industry.

“I intend to write to National Security and the Minister for Defence saying that we have three large scale mining sites which the military have withdrawn their protection from… They should reconsider the possibility of the military rescinding their decision in the case of large-scale mining, maybe it might be necessary that they still protect them unless we want the incident that happened at the Anglogold Ashanti Site to happen again,” Mr. Osei Mensah cautioned.

Senegal prepare to face Mexico in U-20 showdown

Our personnel were at mining site legally – Armed Forces