Facebook has broadened its campaign to raise awareness about fake news, by publishing adverts in the UK press.

The ads, in papers including The Times, The Guardian and Daily Telegraph, carry a list of 10 things to look out for when deciding if a story is genuine.

They include checking the article date and website address, as well as making sure it isn’t intended as satire.

Facebook is under fresh political pressure to tackle fake news in the run up to the UK general election.

Meanwhile, a BBC Panorama investigation to be broadcast later on Mondayhas found the social network played a decisive role in both the US election and Britain’s EU referendum last year.

The platform said it had already removed “tens of thousands” of fake Facebook accounts and that systems were now monitoring the repeated posting of the same content or a sharp increase in messaging. Accounts displaying this activity are then flagged, it added. 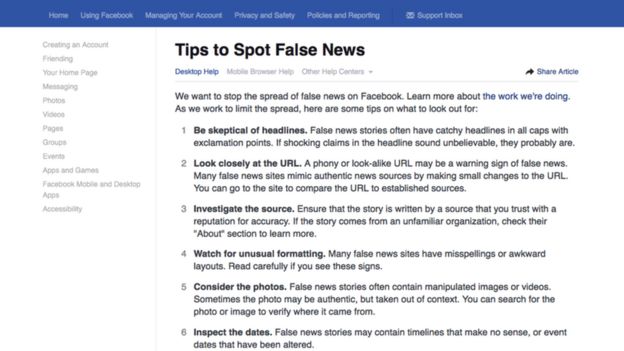 Last month Conservative MP Damian Collins asked Facebook to tackle fake news in the run up to the UK general election on 8 June.

“The danger is, if for many people the main source of news is Facebook and if the news they get on Facebook is mostly fake news, they could be voting based on lies,” he told the Guardian.

In a report released last month, Facebook admitted it had seen political propaganda deliberately spread on its site.

“We have observed many actions by fake account operators that could only be performed by people with language skills and a basic knowledge of the political situation in the target countries, suggesting a higher level of coordination and forethought,” it said in the document.

It added that “several” cases during the 2016 US Presidential election had required action.

“People want to see accurate information on Facebook and so do we,” said Simon Milner, Facebook’s UK director of policy

“To help people spot false news we are showing tips to everyone on Facebook on how to identify if something they see is false.”

He added that the firm was “supporting” two third-party fact checkers – Full Fact and First Draft – in the run up to the election but Facebook declined to say whether this is a financial arrangement.