Airtel Ghana, the Smartphone Network, has presented cash prizes of GHC 45,000 to two winners in the trailblazing Wo Mmere Nie recharge promotion. The presentation was made after a market activation in Tamale, in the Northern Region of Ghana.

Wo Mmere Nie Ghana’s biggest and most rewarding recharge promotion, which is set to end in June has introduced GHC 2,000 daily cash prizes and ramped up the weekly cash prizes to reward customers who participate in the promotion.

The ceremony which took place at the Tamale taxi rank attracted a large crowd of excited patrons. The company presented GHC 10,000 each to Joel Ameah and Daniel Kumafo who were winners for week 12 and 13 respectively.  Daniel Kumafo also walked away with GHC 25,000 for accumulating the highest points at the end of month 3 bringing his total cash prize to GHC 35,000. 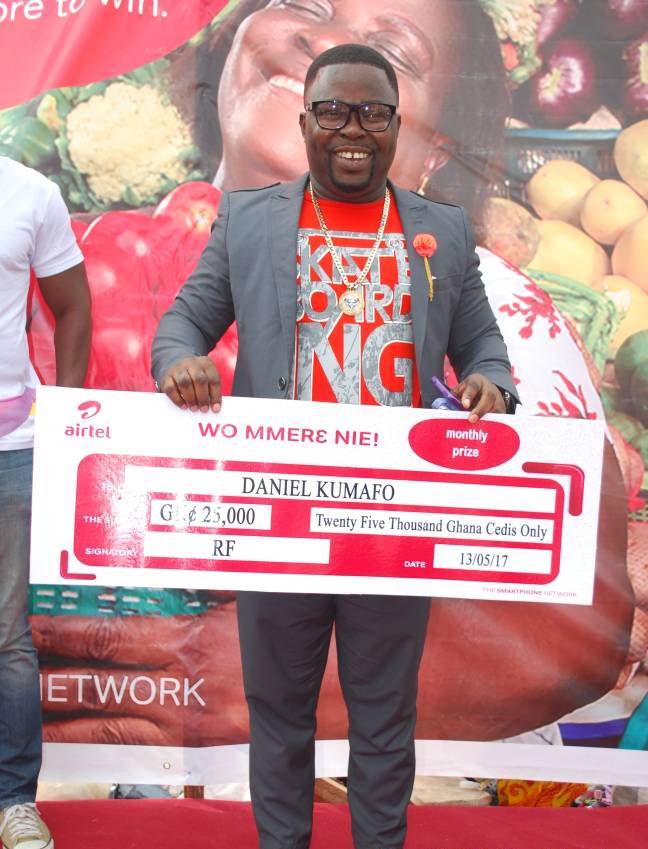 Making the presentation, Samuel Sarpong, Airtel’s Director of Sales & Distribution, said “This promotion has so far rewarded over 2.5 million customers – a testament to the transparency around it. Today we are delighted to reward Daniel and Joel for accumulating the highest points in their respective weeks.  In response to customers demand for an extension of the promo, we announced last week our decision to extend Wo Mmere Nie till June to allow more customers to participate and win.”

He continued “We have also introduced a daily cash prize of GHC1, 000 each for two customers who accumulate the highest points at the end of each day.  Indeed there is no better time to join Ghana’s biggest recharge promo than now.  And you can partake simply by recharging GHC 2 and above or playing the SMS trivia by sending Start to 477. To all our customers, I say, this is your time. Wo Mmere Nie “

Joel Ameah is a digital marketer and has been using Airtel for more than 2 years. He could not hide his joy as he commended Airtel for enriching his life and that of other Airtel customers. He said “I am really excited to be one of the numerous winners in this promo. Initially I was not sure I could win as much as GHC 10,000 just by recharging and playing the SMS trivia” but here I am today. I will invest the money in a bank for now and plan on what to do next with it”.

Daniel Kumafo, a credit officer who won GHC 35,000 as the winner for week 13 and month 3 said “When I received the call from Airtel saying I was a weekly winner I was very happy, but coming here and being called out again as the monthly winner did not come as a surprise, because in addition to recharging, I played the SMS trivia. I am super excited to have won an additional GHC 25,000. My eyes are set on the ultimate cash prize of GHC 150,000 so I will continue recharging and playing the SMS trivia”.

Two customers with the highest points at the end of each day will now receive a cash price of GHC 2000.

The customer with the highest accumulated points at the end of each week will receive a cash prize of GHC15, 000

At the end of the promotion, the customer with the highest accumulated points wins the ultimate cash prize of GHC 150,000.

Customers also have the opportunity to build up points by playing the innovative SMS trivia by sending START to 477 to subscribe and answer questions.

Airtel prepaid customers who recharge or purchase data bundles using Airtel Money automatically receive double points for every recharge worth GHC 2 and above.

Points accumulated weekly and monthly are automatically rolled over to the following month to give every customer an increased opportunity to win.

Customers can check their accumulated points by sending POINTS to 477.

Airtel “Wo Mmere Nie” is Ghana’s biggest consumer recharge promotion and is transforming lives of Airtel customers across the country.

We’ve been chasing ECG bills for two years – US Embassy

UER SHSs to reopen on May 22