“God knows I have done my best for Kimbly; but I can no longer continue thinking about his death. I have to move on now and find ways of pushing my two other siblings.”

These were words from 16-year old Vanessa Kyei, Kimbly’s elder sister when I visited the family home at Pig Farm in Accra to confirm his death.

Vanessa tells me her brother who suffered from chronic kidney disease died around 5:00pm last Thursday (April 27). He was on dialysis for seven months amidst a very difficult financial constraint.

“I went outside to go and pray. When I returned, he was sitting on the bed and told me he was hungry so I gave him food. He started eating faster and I scolded him; but he started drawling. I got scared and started panicking” she says.

“As soon as he finished eating, he fell on the bed and told me some people were putting him in a grave. He asked me to pray for him. Eventually he went into coma with his tongue out. A few hours later, the doctors came to tell me there was nothing they could do but to let my brother go.”

Three weeks before his death, Kimbly was not receiving dialysis. According to Vanessa, the doctors could not get access to his veins and so they asked them to stay home until they find other alternatives. Even when she felt her brother’s condition was worsening, there was nothing she could do if the doctors haven’t asked her to resume the treatment. Her brother’s situation was a difficult one because he was young, the doctors said. 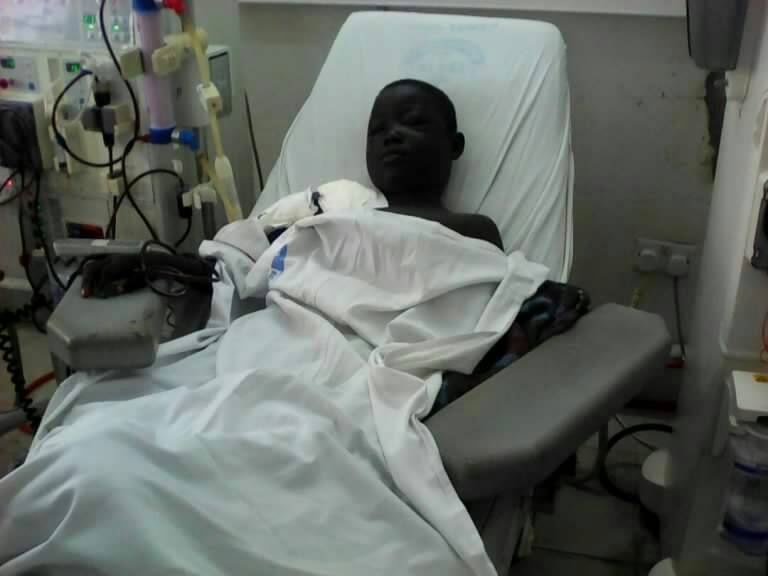 Up until now, the only person oblivious of Kimbly’s death is his 42-year-old mother. She has not been in a good mental state for eleven years. For someone who has worked as a caterer at the Golden Tulip Hotel, her catering skill is still intact however. On my visit, I met her in their compound house preparing food for the family. The first question she asked me was whether I have gone to see her son at the hospital. Vanessa told me they are scared breaking the news to her will aggravate her situation. Kimbly and his mother were an inseparable pair. 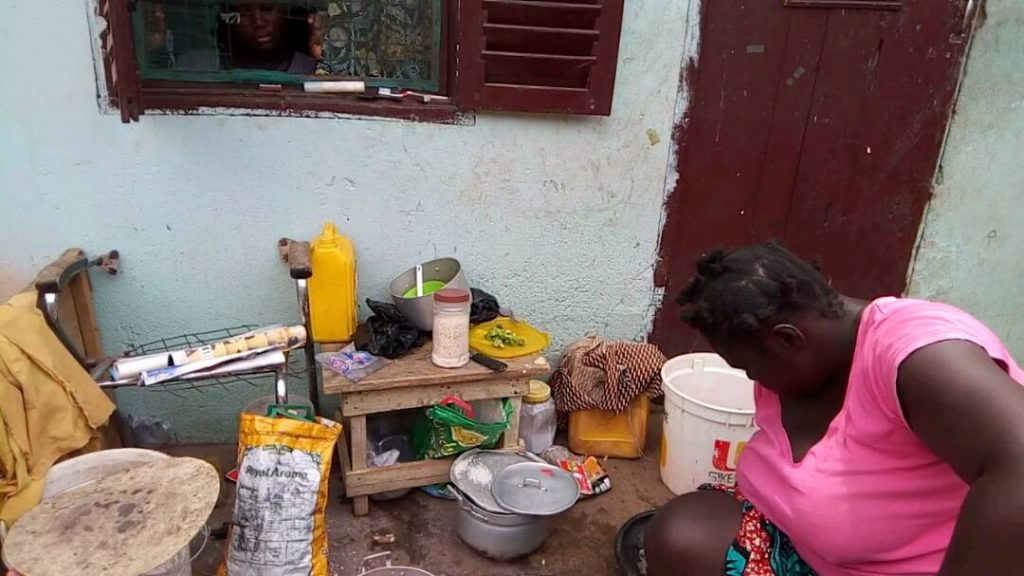 Like the trials of Job in the bible, this family is facing very difficult times. The children’s father died while in South Africa. Even though he used to send money home, Vanessa tells me that her father’s family who were recipients, kept it away from them.

“I started selling with my aunt. Unknown to us, my father use to send money to her; but she never told us so we even thought my father was wicked to us. So one day I called to ask him and he narrated everything to me. Few days later, he died.” 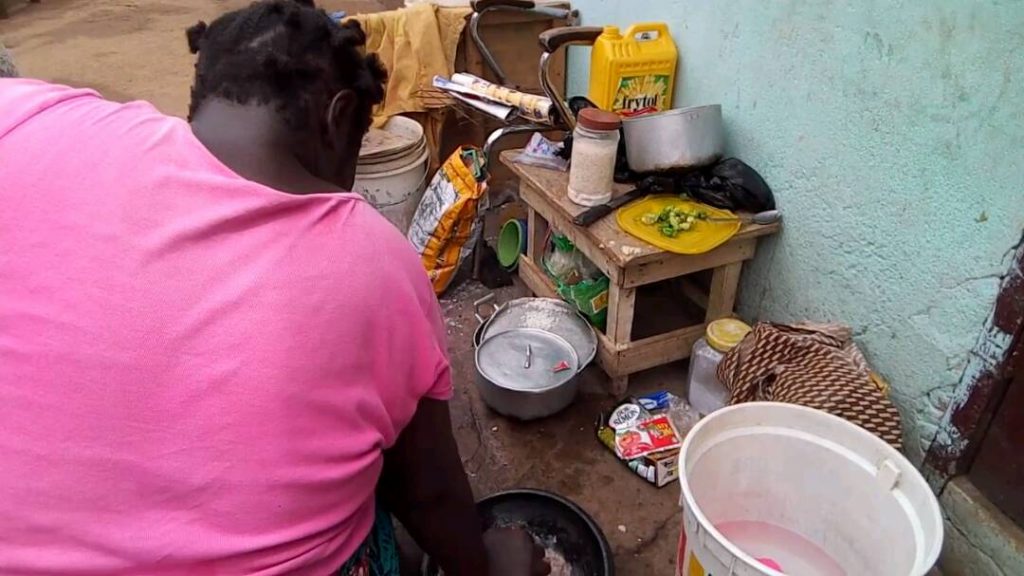 Before her mother’s illness, Vanessa tells me she was a very hardworking woman who never denied her children a good life and education. She recounted to me how she use to go to one of her mother’s eleven catering services scattered all over the capital to make a choice for anything they want- from pastries to natural fruit juices and even jollof.

However, since she lost it, most of her workers and business partners have parted ways with her. Some of the businesses have collapsed, and most of the proceeds cannot be accounted for because the family has no details of its management. 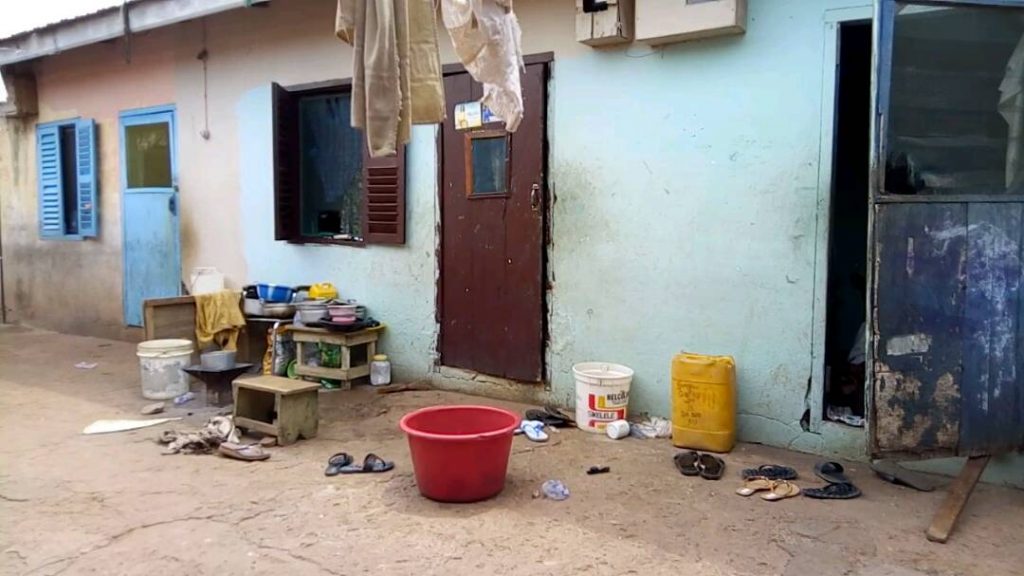 In this compound house, Vanessa and her six other family members rent a chamber and hall room. Until Kimbly’s death, seven of them use to sleep in the room. Now six of them including her two other siblings, her grandmother, her mother and her mother’s brother, share this room together. Her uncle pays the rent, until he lost his job a few months ago.

“My uncle was able to help me complete JHS; but said he could not help me further to the Senior High School. He was sacked from work and that led him to drinking.” 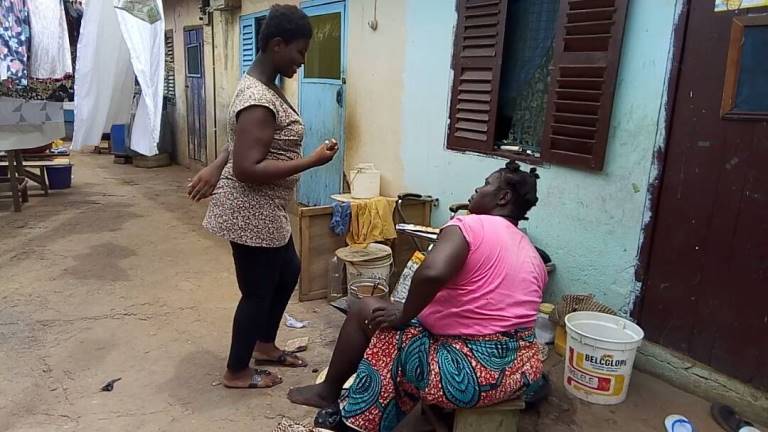 This room is not in the best of shapes. It barely has space to accommodate the whole family. There is only one mattress placed in a corner in the hall amidst utensils and some clothes. Most of their clothing are scattered in this cluttered room. It has no electricity.

“I sleep on the mattress with my grandmother and little sister. My uncle has a student mattress which he places at the entrance of the room. My mother also sleeps on the floor in the chamber room with my other sister and Kimbly before he died. At times we sleep outside when the room gets hot because there is no fan, no electricity.” 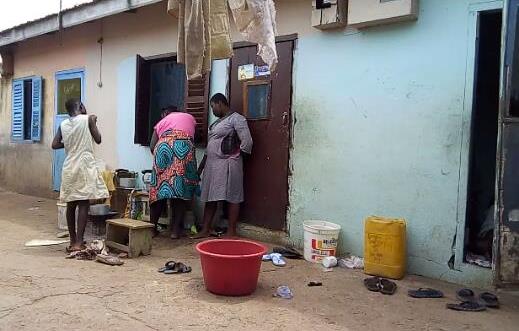 Two of Vanessa’s sisters are 11 and 14 years old. They both attend a government school in the area. However, getting money for their upkeep has become cumbersome. Their school uniforms are tattered and so are all their clothes. They lament how difficult it is to get access to educational materials because they do not get help from anywhere. 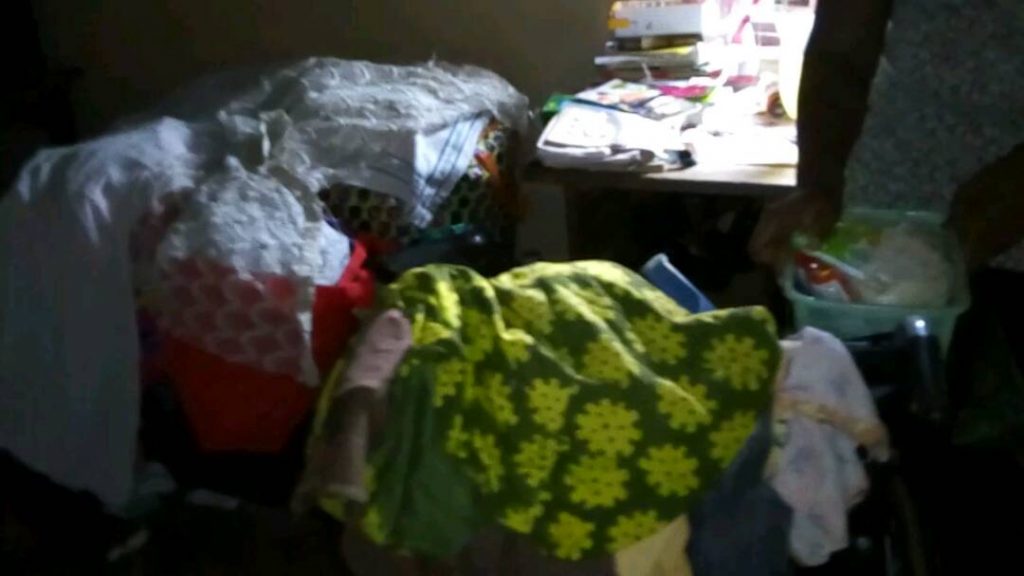 Now Vanessa, who is the only hope for the family is left in a dilemma. Her dream of becoming a dietician someday seems to hang in the balance.

“The family members are there; but I have just counted myself out. I have done enough for Kimbly and I don’t want to continue with his death. All I want now is to go to school, and also leave this house because the tenants are very rude towards us because they say my mum disturbs a lot. I also wish my two siblings would get access to quality education, especially with their uniforms and clothes for home and church.”