Two school buses of the Bolgatanga Technical Institute (BOTECH) in the Upper East Region, were completely burnt on Thursday on the school’s campus.

Even though the cause of the fire could not be immediately established, the Headmaster of the school, Mr. Thomas Abare, said this will affect the school’s co-curriculum activities.

“The information I gathered was that, my daughter who was at home heard an unusual sound from the Yutong bus which was parked close to my bungalow like the engine of the car wanted to start, so she called one of the teachers to come and see what was happening.” 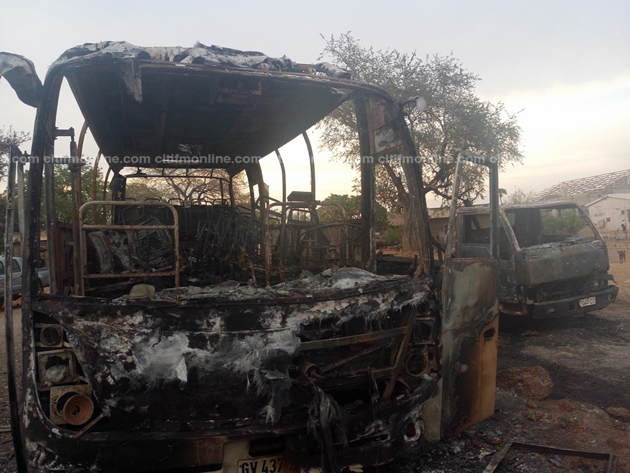 “…So when the teacher came, he saw that, the wiper of the car was moving left and right and before then, there was smoke coming out of the car and some students were also around so they tried putting off the fire, but had called the Ghana National fire service.”

He narrated further that, “But before the fire service could get to the school, the fire had already burnt down the two vehicles. I had to work hard to secure the yutong bus for the school only to see it burnt down.”

Mr. Abare said the tragedy was a big blow to the school and the community, since the yutong bus was used to run the school’s co-curriculum activities and support the community in diverse ways.

He said he would officially write a report on the incident to through the Municipal and Regional directors of Ghana Education Service (GES).

Mr. Abare appealed to the PTA of the school, NGOs, Philanthropists and the general public to support the school in getting them a mini bus or a pick-up to ease the transportation problem that will confront the school.