A school bus has run into a 62-year old motorist killing him at Sagyimase, a village near Kyebi in the East Akim Municipality of the Eastern Region.

Confirming the incident to Citi News, Detective Sergeant  Kamal Guma of the Kyebi Divisional Police Command, said the school bus was on its way to convey examination papers when the accident occurred.

“…It was a school bus which belongs to Nsutem Senior High School, which was on its way to Abuakwa State College to convey exams papers to final year students at Nsutem who are writing their WASSCE; but upon reaching a section of the road at Segyimase, a motor rider crossed the bus which resulted in the accident.” 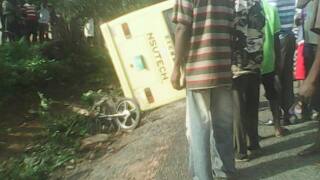 Detective Sergeant Guma added that “the occupants of the school bus, a police constable called Frederick Nkansah, the bus driver Hayford Amoako aged 45, and a tutor, sustained injuries as well as the motor rider Isaac Nkansah 62 years. They were all rushed to the Kibi Government Hospital, but unfortunately Isaac Nkansah died shortly upon arrival at the hospital, but the three others who were in the bus are in a stable condition and are responding to treatment.”

Detective Guma added that, the police is still investigating, “we have opened investigations into the incident and we will soon come out with our findings.”